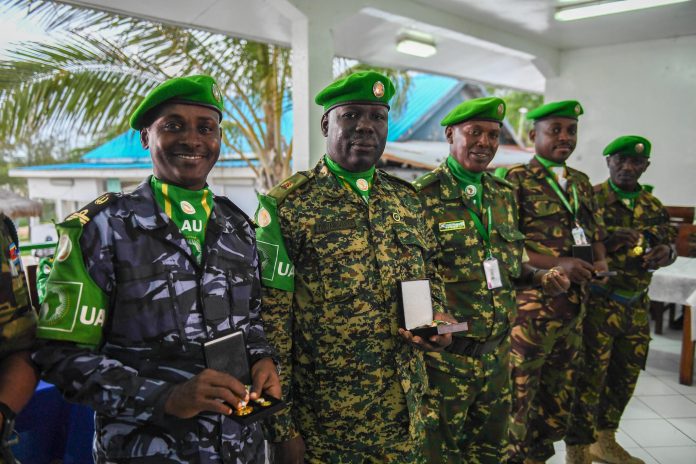 The African Union Transition Mission in Somalia (ATMIS) on Saturday presented medals and certificates to 40 outgoing military staff officers for their outstanding contribution in supporting Somalia’s pursuit for lasting peace, security, and stability.

ATMIS Deputy Special Representative of the Chairperson of the African Union (DSRCC) Ms. Fiona Lortan, who presided over the ceremony, said the “selfless service” and immense sacrifices of the officers had helped advance the goals of the Somalia Transition Plan.

“In the time that I have been here, I have discovered that this is not an easy posting at all. Despite numerous challenges, you have given everything to support Somalia,” said Ms. Lortan. “It is a symbol of pan-African solidarity, which we are trying to forge and promote on this continent,” noted the DSRCC.

Speaking at the event, ATMIS Force Commander, Lt.Gen Diomede Ndegeya, praised the officers for effectively discharging their duties in planning, coordination, and providing administrative and logistical support during their tour of duty

“The spirit of cohesion that you have demonstrated shows how devoted Africans are to restoring peace on their continent,”  the Force Commander said.

The officers were especially praised for their role in supporting ATMIS’ strategic objectives as defined in the Concept of Operations (CONOPS). The CONOPS provides a framework for harmonised plans and targeted operations between ATMIS and the Somali Security Forces to degrade Al-Shabaab and other terrorist groups.

“I have witnessed the resilience of the African spirit. Several nations have come together to support an African country in its time of need. During my tour of duty, I have seen selfless service from men and women who are dedicated to the goals of the mission,” said outgoing ATMIS Chief Force Engineer, Colonel Saheed Olalekan Sadiq.