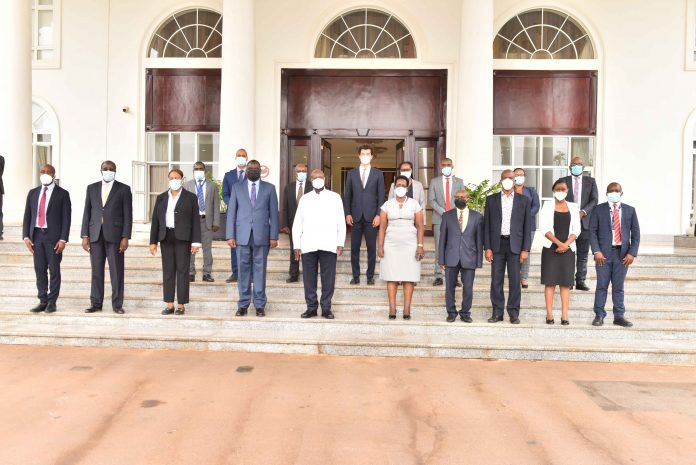 President Yoweri Museveni has said that Uganda is aggressively investing in the pathogenic economy and is building on its experience in manufacturing AIDS drugs for the last ten years through the Quality Chemicals Industry, adding that the industry has grown to produce other drugs including anti malaria, antibiotics and anti-Tuberculosis drugs among others.

“For us we are moving on with what we call the pathogenic economy. The issue is whether Africa will move with us. We started long time ago with AIDS drugs. Why should foreigners make money out of our sicknesses and not us,” he said.

The President was today addressing a team of nine African Union members on a verification mission of countries bidding to host the African Medicine Agency (AMA) Headquarters at a meeting held at State House Entebbe.

On 1 November 2021, the Republic of Uganda became the twenty sixth (26th) African Union (AU) member state to sign the Treaty for the establishment of the African Medicines Agency (AMA) at the AU Commission in Addis Ababa

Uganda is among the eight African countries including Rwanda, Tanzania, Zimbabwe, Algeria, Egypt, Tunisia and Morocco bidding to host the Agency. The new agency will provide a streamlined regulatory authority that would improve quality medicines access, and combat substandard imports according to reports.

AMA will also guide the regulation of medicines, and facilitate access to quality medicines on the continent.

The AMA Treaty was adopted by Heads of States and Government during their 32nd Ordinary Session of the Assembly on 11 February 2019 in Addis Ababa, Ethiopia. The African Medicines Agency aspires to enhance capacity of State Parties and AU recognized Regional Economic Communities (RECs) to regulate medical products in order to improve access to quality, safe and efficacious medical products on the continent. AMA shall build on the efforts of the African Medicines Regulatory Harmonization (AMRH) initiative (2009), which is led by the Africa Union Development Agency – the New Partnership for Africa’s Development (AUDA-NEPAD). The AMRH initiative provides guidance to AU recognized Regional Economic Communities (RECs) and Regional Health Organizations (RHOs), to facilitate harmonization of regulatory requirements and practice among the national medicines authorities (NMRAs) of the AU Member States. AMA will be the second specialized health agency of the African Union after the Africa Centres for Disease Control and Prevention (Africa CDC).

The President said Uganda has invested heavily in the medical industry with several more infrastructure coming up given is history with HIV/AIDS, Ebola, Marburg and now CORONA pandemic.

“We have dealt with all these epidemics and now our people have the capacity. They are highly educated and qualified human resource. Uganda is now at stage six in two of the vaccine developments. We are moving and we shall continue moving,” he said.

President Museveni called for Africa to work in a more collaborative way to produce a vaccine.

“We are already in advanced staged in what we are doing. For example, the Uganda Virus Institute was actually the one which worked on the vaccine for Ebola. We would want our brothers to work with us.. if one produces this reagent, others can produce different one. There are also special mice which are used in experiments which need to be worked on. We can work in a collaborative way depending on who can do what best. East Africa should work as a team because it’s a big effort,” he said.

According to Dr. Diana Atwine the Permanent Secretary Ministry of Health, the AU delegation which arrived in the country on Wednesday today did the bid opening for Uganda and are now in the processes of verification of documents according to their questionnaire.