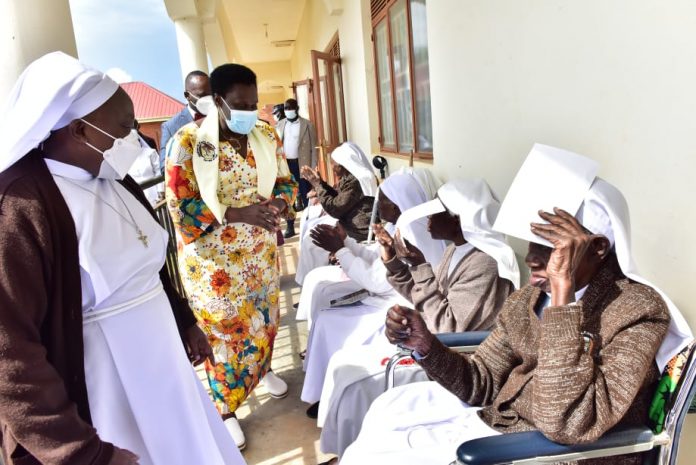 BUIKWE-Little Sisters of St. Francis, Nkokonjeru in Lugazi Diocese have launched a fundraising drive to construct a multi-million Mother Kevin Building as part of activities to mark 100 years of Mother Kevin Mary Kearney in Buikwe district.
Mother Kevin, a Catholic nun came to Uganda in January 1903 as part of a group of five nuns from the congregation of the Franciscan Sisters of Saint Mary’s Abbey, Mill Hill, London. She came to Uganda to back up the Mill Hill Fathers at the time when British interests in East Africa were high.
From the group of five nuns, Kevin had far-reaching impact on humanity as her works resulted into the establishment of health care facilities, education institutions and two religious congregations: Franciscan Missionary Sisters of Africa headquartered at Nsambya, and Little Sisters of St Francis of Assisi headquartered at Nkokonjeru in Buikwe district. The little sisters of St Francis serve in Uganda, Kenya , Tanzania and USA.
While launching the fundraising drive, Vice President Rtd. Maj. Jessica Alupo said, Mother Kevin deserves the celebration as she worked very much for the poor, needy and especially the sick and those who were suffering from leprosy hence opening up clinics for them at Nyenga and Buluba in Mayuge district which was later transformed into St Francis’ hospital Buluba, currently under the management of Jinja Catholic diocese. On the education front, Alupo said Mother Kevin founded schools such as Mt St Mary’s College Namagunga in Mukono district and St Joseph’s Girls SS Nsambya, among others. Mother Kevin’s 52 years of missionary work in Uganda are remembered for her generosity and compassion for for the poor and needy, which gave her the name ‘Maama Kevina

The Vice President said as government, they are aware of the great work done by Little Sisters of st Francis and how they have touched and influenced lives of many people in Uganda and beyond.
She commended the sisters for such enormous service to humanity. “You indeed complement government in the provision of various services in Education, health, pastoral and social ministries,” the Vice President said.
The celebrations to be marked in May Next year will be guided by the theme: ‘Looking at our past, with gratitude, our present with passion and our future with hope’.
Alupo handed over President Yoweri Museveni’s contribution of Sh30m towards the construction of Mother Kevin Building and an extra Sh5m to cater for the welfare of the Elderly Sisters under the care of Little Sisters of St. Francis.
She said as political leaders speak about strengthening East African integration, the Little Sisters already started the strengthening and consolidation of integration a long time ago as little sisters from Kenya and Tanzania were equally present in the ceremony.

Alupo noted that for the record, Mother Kevin established 50 institutions in both Eastern and Central Uganda. She explained that it is through her compassion that Mother Kevin paid special attention to marginalised societies. Alupo expressed gratitude to church leaders including Bishops, Priests and Catechists for the support rendered to Little Sisters in their quest to serve humanity and pledged continued government support.

While leading Mass, Bishop Christopher Kakooza, of Lugazi Diocese reminded Christians to emulate the life of Mother Kevin by contributing towards the wellbeing and welfare of the Elderly Sisters.

The Leader of Opposition Mathius Mpuga said he was challenged and humbled by the works of the Little Sister and urged government to consider the humble works of these organisations by seconding and paying their staff.

He contributed Sh5m towards the construction of the building and another Sh5m on behalf of his colleagues.

The Superior General of Little Sisters of St. Francis, Sister Mary Cecilia said the association of Friends of Mother Kevin chose to construct a memorable building:- Mother Kevin Centenary building in celebration of her loving service to God’s people. The building will accommodate 100 self-contained rooms to house Elderly sisters.

During the launch, about Sh300m was raised in both cash and pledges.