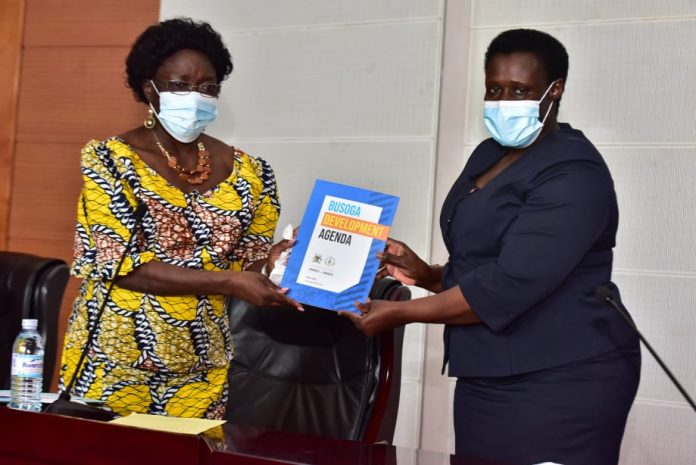 The Vice President was speaking at a meeting where she met a delegation of leaders from various districts of Busoga under their umbrella body- Busoga Consortium for Development (BC).

She applauded the delegation over their shared development agenda and work plan that seeks to drive the region to improved socio-economic status.

The meeting that took place in Kampala was attended by Rt.Hon Rebecca Kadaga,  who doubles as the Patron of the consortium, Ministers from Busoga and  LC 5 chairpersons of the districts that make up the Busoga region.

Alupo thanked her predecessor Edward Kiwanuka Sekandi who founded the “Local Government Led-economic Development Initiative”, from which the consortium drew its lifeline.

She applauded the initiatives and drew her remarks to the  need to consolidate regions and accelerate the discharge of service delivery  to the people.

“I strongly welcome the shared interest for social economic transformation as well as forging strong linkages-especially amongst people who share a common heritage”, she said, adding that this was the spirit and the main motive of the local government Led-economic development Initiative.

Alupo stressed the need for the creation of links that connect the leadership with ordinary citizens noting that “the Local Government structures will go an extra mile to operationalize the various programs at hand.”

Kadaga explained their journey, saying they Consortium had registered several achievement including partnerships one between Jinja City and Shenyang City of China, Jinja School of Nursing and Shenyang Medical University in China, Busoga Consortium and Liaoning Province, among others to rally for more business linkages and opportunities. Kadaga made an appeal to the Vice  President  to support the efforts of the Busoga Consortium for development through the Busoga Development Agenda workplan, soon to be launched.

The idea of consortiums is drawn from Article 178 (1) of the Constitution of Uganda and the Local Government Act Cap243 Section 8, which encourage Local Governments to cooperate and work together for common development interest.

At the same event, Local Government Minister Raphael Magyezi rallied the leaders to embrace the Parish Development Model while at the same time making a case for the Busoga Development Consortium established in April 2017, two years after the Greater Masaka Consortium was formed.

Magyezi stressed the importance of cooperation among local governments on development-related interests. He also showed the linkage of the initiative to the National Development Plan (NDP) III, which underlines the need for district programs to be mainstreamed into the relevant government ministries, Departments, and agencies (MDAs) noting that local governments were a viable mechanism to ensure the involvement of all key stakeholders in determining the quantity, quality, and location of the social service investments in the identified regions.

Present at the forum were the 3rd Deputy Prime Minister Rukia Nakadama, Ministers Milly Babalanda, Kyakulaga Bwino and Persis Namuganza, all from Busoga.

In her remarks, Minister for Presidency Milly Babalanda called for continued unity in order to realise and foster quicker development.