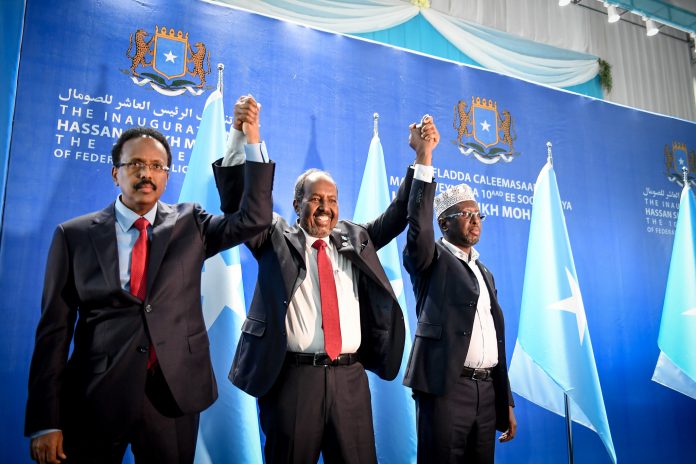 The United Nations in Somalia today congratulated President Hassan Sheikh Mohamud on his inauguration, and said it looks forward to working with his administration in support of achieving national priorities.

The inauguration ceremony for Somalia’s tenth president held in the venue known as ‘the hangar’ in the Aden Adde International Airport area of the capital, Mogadishu.

In his remarks to the event, President Mohamud covered various topics, including peace and reconciliation efforts in Somalia, with the latter involving efforts to ensure respect for people’s rights, good relations with Somalia’s Federal Member States, a democratic system of governance and a just and fair judicial system. Protecting the environment and strengthen the country’s economy were also featured.

On the regional and global front, President Mohamud spoke about the need for cooperation to improve security in the Horn of Africa region, and enhanced trade and economic collaboration.

The worsening drought in Somalia was also highlighted. President Mohamud appealed to all Somalis and the international community to work together to help the millions of affected Somalis.

Earlier this week, UN humanitarian agencies warned that a historic fourth consecutive failed rainy season in Somalia, along with skyrocketing prices and an underfunded humanitarian response have resulted in a 160 per cent increase in the number of people facing catastrophic levels of food insecurity, starvation and disease around the country.

They went on to say that with no end in sight for the devastating drought affecting the country, the risk of famine looms larger than ever, and an urgent increase in support from the international community is essential to avert famine. Some 7.1 million Somalis – close to 50 per cent of the population – currently face crisis-level food insecurity or worse through at least September 2022.