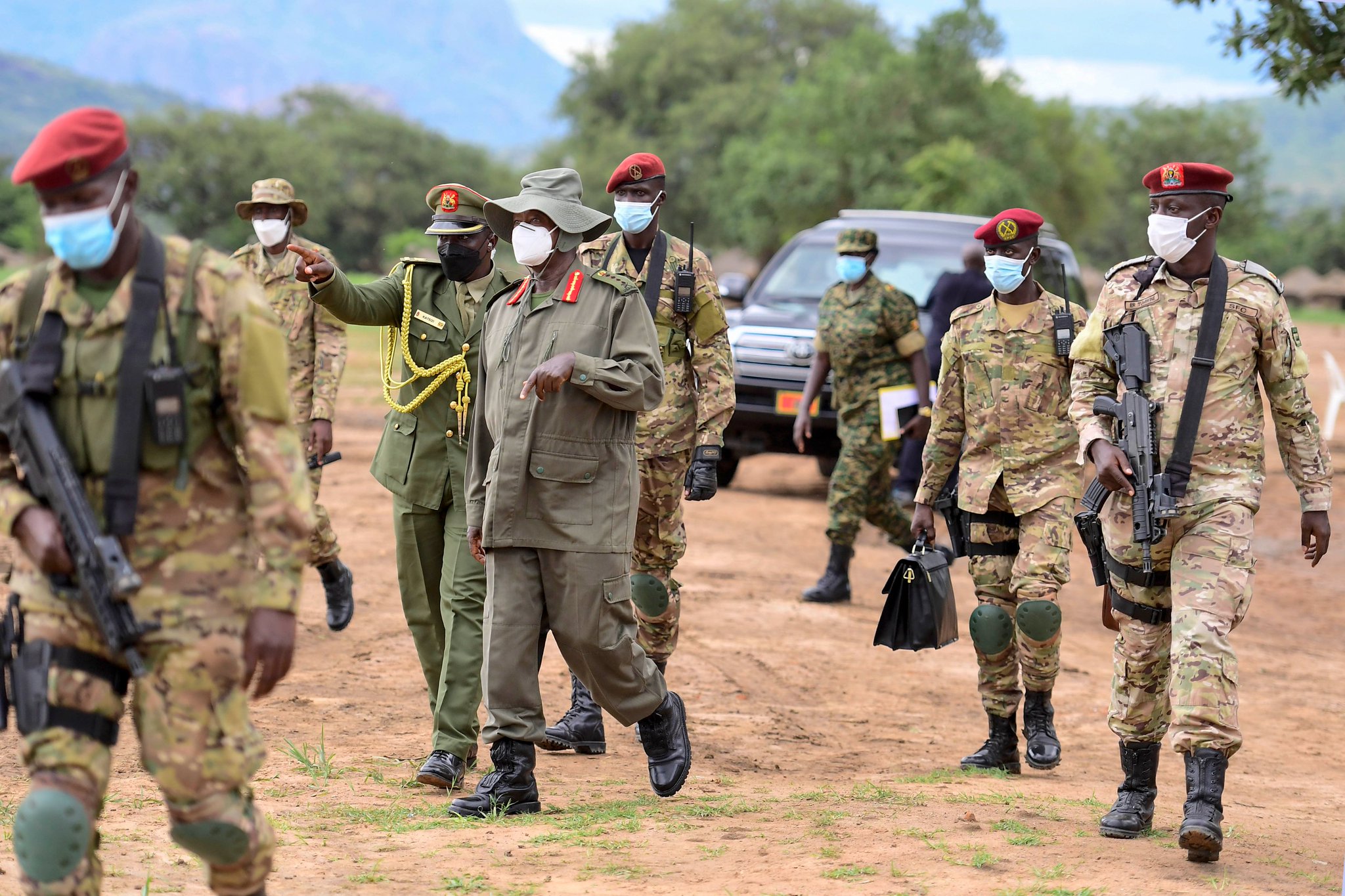 Coming on the heels of a successful Operation SHUJA in the Democratic Republic of Congo, President Yoweri Museveni buoyed up the Men and Officers of the Uganda Airforce Wing for their exemplary performance in neutralizing the ADF, as security forces now turn to combing the Rwenzori Mountains to pursue remnants that fled the onslaught in the DRC.

“The lion lives in the jungle, not on the roads, the road lion is for the zoo. Our Airforce can do many things easily. This is a capacity we should enhance” President Yoweri Museveni who is also the Commander-in-Chief of the Uganda Peoples Defense Forces (UPDF) addressed the Airforce, congratulating them on their build up on the force nucleus that was started in 1986 and is now a formidable force in modern warfare.

“You have done a good job in operation SHUJA! Aircrafts hit targets quickly, accurately, in surprise attacks and quite devastating, The artillery and infantry were all doing great. Let me take this opportunity to thank you and to encourage you all,” he said.

The Commander in Chief made the remarks this afternoon while meeting a contingent of Men and Officers of the Uganda Air Force Wing at Entebbe Air Base that recently participated in Operation SHUJA in the DRC. This is the first of a series of meeting that the President will hold with the forces to appraise himself with progress of the SHUJA Operations and situation on ground and among forces.

“Defence has two sides, Offensive and Defensive. We have both capabilities. Be very sure that you are on standby duty 24hours to ensure the shield (Defence) is in place all the time and the Spear (Offensive) is ready when required,” Museveni said.

Operation SHUJA that is being conducted jointly by UPDF and the DRC Army made huge achievements in dislodging ADF rebels from their camps in the DRC leaving some of them scattered and on the run in the mountains.

General Museveni congratulated the leadership of the Air Force upon the buildup of the Force observing that in 1986 the Army had to start a fresh by recruiting new soldiers into the force.

He was however glad to note that the force now has a nucleus which he recommended to be expanded.

“I think we now have a good nucleus which you should expand quickly to fill the gaps. I came to thank you, check on what you have and what is happening as well as to encourage you,” he said.

The General pledged to address concerns raised by the leadership of the Uganda Airforce including upgrading the Nakasongola Airfore Base, procurement of aircraft parts in view of the Ukrain-Russian war and army welfare.

The CDF General Wilson Mbadi commended the Commander in Chief for interacting with the forces especially those that participated in Operation Shuja.

“The Airforce played a big role in Operation Shuja, bombing bases of the enemy and softening the grounds helped in the delivery of supplies and troops in isolated areas. This coupled with air defense, intelligence, survilance reconnaisence, battle assessment and combing the Rwenzoris to pursue remnants of ADF so that we don’t leave any enemy behind us to cause havoc when we go ahead,” he said.

Gen. Mbadi said the great range of the Air Force assets made it possible to strike bases were the ADF had camped for years freezing their actions and dispersing them.

The meeting was also attended by the Deputy CDF Lt. General. Peter Elwelu as well as the Commander of the Air Force Lt. Gen. Lutaaya who made a detailed report of the forces progress in the operation.