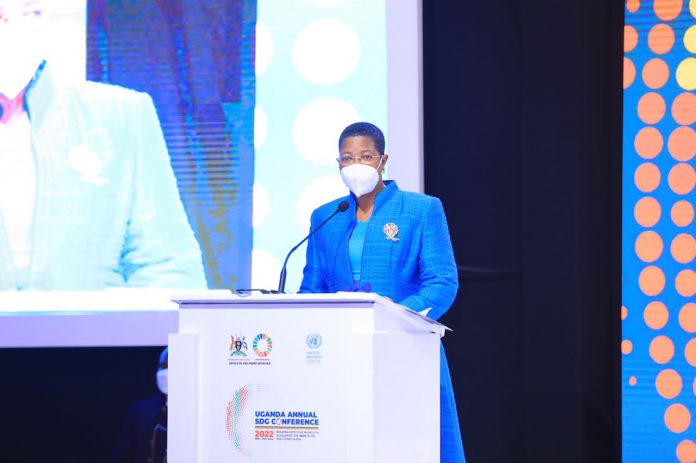 The Rt Hon. Speaker of Parliament Anita Among has this morning urged major stakeholders, including government and United Nations officials, to ensure that implementation of the UN’s Sustainable Development Goals (SDGs) reaches the most marginalized and vulnerable communities as a way of enabling the country register the desired goals.

“There should also be credible and timely information of the people and communities left behind so they can be better targeted by Government development programs, laws and policies and appropriate attention,” Speaker Among told stakeholders at the conference.

She added: “I therefore urge you participants in this conference that as we deliberate on key models to accelerate the SDGs, let us also make an effort to map and identify those communities that have been left behind so that we can better serve them.”

This was contained in her speech delivered at the final day of the Uganda Sustainable Development Goals Conference held at the Serena Hotel in Kampala on June 17th.

In her message that was largely aligned to the sub-theme the role of Parliament in the implementation of the Sustainable Development Goals, the Speaker noted that this inclusion will greatly impact on such communities.

She further reassured the country of Parliament’s commitment to oversee and ensure accountability for the efficient and effective delivery of expenditures, laws and programs which have a direct effect on the people.

“Parliament has a critical role as a powerful domestic accountability mechanism. Parliamentarians establish accountability-enabling environment through enactment of laws, but also have direct responsibilities for ensuring accountability through their own oversight efforts. In doing this, parliament ensures that government programs and the SDGs aspirations reach and make sense to the common person,“She said.

This was also welcomed by the Minster for General Duties in the OPM Hon Justice Lumumba who lauded Speaker Among for the role Parliament has played in supporting government to attain the SDGs.

In attendance also was the Chief Justice Hon Alfonse Owiny-Dollo who strongly cautioned all officials against corruption saying the vice heavily impedes implementation of several programs.

The ceremony is held under the theme “Building Effective Model to accelerate the SDGs in the Post Covid-19 Era,” is meant to among others reflect on the impact that the global pandemic had on the implementation of the SDGs and therefore address on mechanisms that the guide the country into full realization of the SDGs.