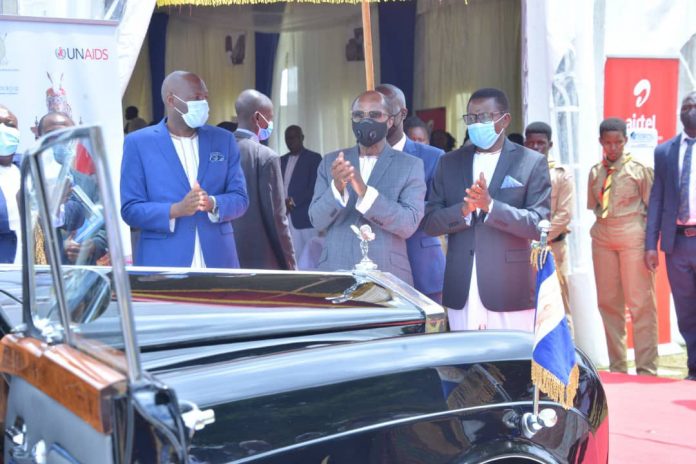 It should be remembered that on every 13th April annually Kabaka Mutebi II celebrates his birthday however this year he was not in the country to celebrate the day Kabaka.

At a function attended by only the invited guests earlier morning of 17th July 2022, Katikkiro Charles Peter Mayiga reminded people to continue avoid and preventing ways of contracting HIV/AIDS as they remember Kabaka is the good will ambassador of fight against AIDS in Africa.

When Kabaka arrived he unveiled the Rolls Royce car that has been restored.

Through Katikkiro Kabaka applauded the committee that made effort to re-engineer the vehicle.

The Katikkiro Charles Peter Mayiga announced to the audience that the vintage vehicle had at last been brought back and was ready to be handed to the Kabaka.

“I want to inform you(Kabaka) that  the vehicle was revamped as is now  in perfect working condition , just like it was in Muteesa’s time. This vehicle emits class,”Katikkiro said.

“We thank President Museveni and his cabinet for sitting, deliberating and accepting having the vehicle given back to Buganda.”

Mayiga explained that in 1966 during the raid at Muteesa’s palace, in the items demolished included three Rolls Royces, two of which belonged to Buganda and one to Muteesa personally.

“We are still trying to follow them,” he said, adding that the one revamped was bought for Muteesa by government as the first president of Uganda.

In attendance were the prince David Wasajja, former Buganda Katikkiros, Kampala Lord Mayor, members of parliament and other invited guests.