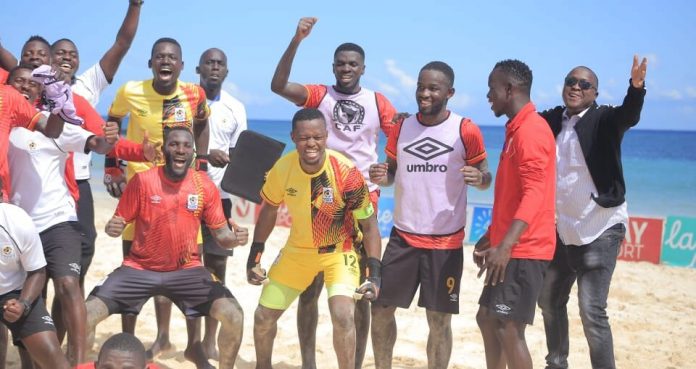 FUFA President, Hon. Magogo Moses has promised on behalf of the Executive to pay USD2000 to each member of the 25-man Sand Cranes contingent if they qualify for the AFCON Beach Soccer Finals this year.

Uganda won the first leg 5-2 in Moroni and will play the final and second leg on 7th August 2022 at FUFA Technical Centre, Njeru.

FUFA President met the team in Njeru on Thursday together with the Leader of Delegation Ronnie Kalema, Deputy CEO-Football Decolas Kiiza, FUFA Football Development Director Ali Mwebe and National Teams Manager Patrick Ntege. “We are here to motivate the team. We know how much we have invested in the development of Beach soccer in Uganda. It is time to keep shining on the Continent and this must be done by knocking out Comoros next weekend” noted FUFA President.

The winner on aggregate will qualify for the final tournament that will be hosted by Mozambique later this year.