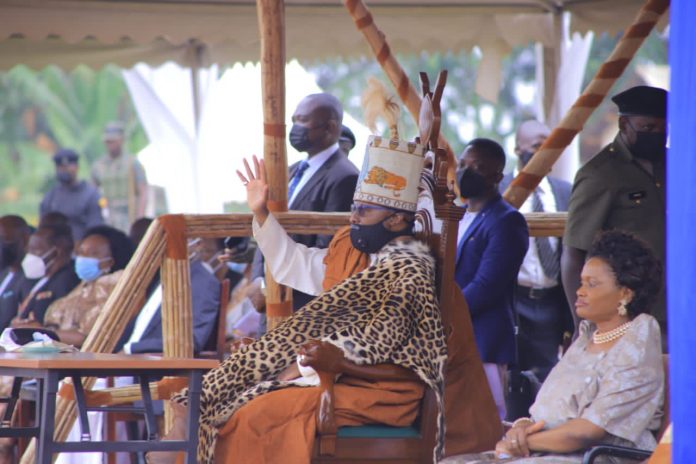 Buganda has woken up in jubilations  as they celebrate the 29th coronation of Kabaka Ronald Muwenda Mutebi II since was enthroned on 31st July 1993 at Naggalabi Buddo.

In the wee hours crowds of people were at Kabaka Anjagala road waiting to see their King while entering the Palace.

At midday, He arrived and alarm covered outside and inside the palace. As a norm, he first greeted the drum known as ‘Mujjaguzo’.

“We advise the government to put measures of assisting coffee farmers by reducing on taxes of fertilizers to enable them benefit on coffee crop,  can only benefit from coffee production if we center on carrying on standards. And it can only be attained if coffee seedlings are sold at appropriate prices,” Kabaka said.

Kabaka asserts that government should consult all coffee stakeholders before implementing a law regulating coffee production.

He also asked the government to put in place mechanisms that can help coffee farmers to borrow money from financial institutions without being affected in one way or another.

The Katikkiro Charles Peter Mayiga reported to Kabaka that they have unveiled thirty one paintings of Kings reigned before Ronald Mutebi as a sign of keeping Buganda history.

“The project to hunt for the photos of the Kabaka kicked off seven(7) years back and its  only five kings had still photos.” Katikkiro Mayiga said.

Katikkiro also applauded Kabaka for his effort in the fight against AIDS.

“We waited to hear what the president had to say, Is he accepting us or no, till the time he accepted us and told us to go on with the coronation of the kabaka. And that’s why we want to appreciate the president” Nabbossa said.

After the Kabaka served his subjects a whole bull.

In attendance were the first vice chairperson NRM Alhaji Moses, NUP president Robert Kyagulanyi, ANT president Gen Mugisha Katuukiro of Busoga, ministers from Obukama of Tooro and Bunyoro members of parliament among others.