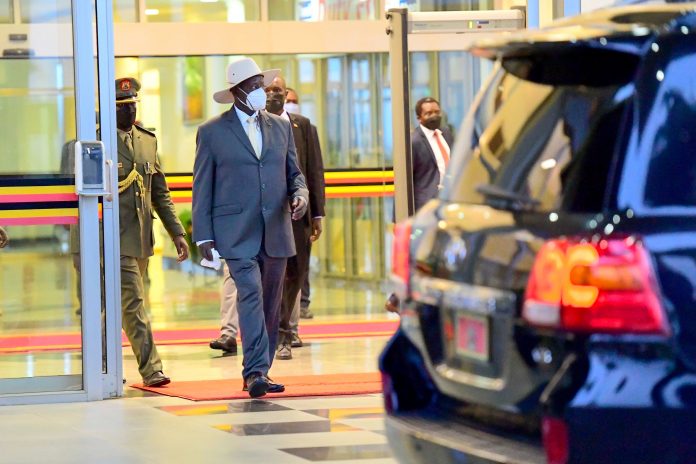 Speech by H.E. Yoweri Kaguta Museveni President of the Republic of Uganda

During the Celebrations to Mark JANANI JAKALIYA LUWUM DAY

Forty five years ago, Archbishop Janani Jakaliya Luwum was brutally murdered, for his firm stand against the evil crimes of the Idi Amin regime on the people of Uganda. This gruesome murder, which occurred on the 16th of February, 1977, coincided with the 100th Anniversary of the arrival of the first Anglican Missionaries in Uganda under the auspices of the Church Missionary Society (CMS). The first Anglican Missionaries reached the southern end of Lake Victoria in 1877. Therefore, Archbishop Janani Luwum was murdered during the preparations for the centennial celebrations of the Church of Uganda, which were slated for 30th June, 1977. He was supposed to be the main celebrant at this important occasion. The arrest, torture and murder of the Archbishop were not only criminal, but also grave sacrilegious acts.

“Do not touch My anointed ones; do My prophets no harm.” (New King James Version)

Religious leaders carry the anointment of the Almighty God to shepherd and guide the people in spiritual matters.

Therefore, when you harm an anointed person, you are directly obstructing the progress of God’s work and bringing a terrible curse upon yourself. Idi Amin brought a curse upon himself by murdering Archbishop Janani Luwum.

Government gazetted 16th February as a public holiday, to commemorate Archbishop Janani Luwum’s legacy and martyrdom. The day is also an opportunity to reflect on the valor and courage displayed by Ugandans in the fight against bad leadership and dictatorship. We honour the memory of the dead and celebrate them for their sacrifice and contribution to Uganda’s liberation from the shackles of oppression. For instance, two Cabinet Ministers, Charles Oboth-Ofumbi and Erinayo Oryema, were murdered alongside the Archbishop by Idi Amin’s soldiers.

The Chief Justice of Uganda, Benedicto Kiwanuka, suffered the same fate earlier, in 1972. He was abducted by Amin’s state operatives from the High Court premises and later murdered. Many Academicians, Religious leaders, Politicians, Business people, Foreigners etc. were either arrested or murdered. Some were forced to flee the country. The situation was even worse for the defenseless peasants who were murdered in hundreds and thousands. It is this abysmal state of affairs which forced some of the patriotic

fighters to mobilize mainly the peasants from the countryside to defend themselves and defeat dictatorship.

I have explained, elsewhere, the genesis of the Idi Amin phenomenon of bankrupt leadership, which bedeviled not only Uganda, but also other parts of Africa. It has its roots in the distorted structure of political power, which we unfortunately inherited from the colonial government. It was characterised by a dualism, whereby you would have Europeans on top and African auxiliaries below them. In administration, for instance, there would be a British administrative officer with an African clerk below him. In the army, there would be a British Officer with a Ugandan sergeant, Amin type, below him. In the 1960s, when Uganda was about to become independent, the Uganda army did not have a single Second Lieutenant, the lowest commissioned officer. All the officers of the King’s African Rifles were British. By 1960, Idi Amin was one of the three most senior army officers in the Uganda army; yet, Idi Amin had spent only two years in school. When we gained independence, these auxiliaries became the principals. The African sergeants, who were semi-literate, became field marshals overnight: Idi Amin, Mobutu, Bokassa, etc. They overthrew the political leadership soon after independence and took

over the whole society. They did not know how to go about managing a country because they had little education. With such crop of leaders, it was obvious that the country would drift into a state of anarchy and instability.

This is why I and other freedom fighters resisted the Idi Amin regime immediately it captured power. We knew he was a disaster to Uganda’s long-term development agenda and stability.

It is sad that Archbishop Janani Luwum and many others became victims of a broken and bankrupt state. The Archbishop displayed great courage in the face of danger. He had the option of running into exile, but he chose to stay with his flock and endure humiliation and intimidation from Amin. He refused to abandon the people for the sake of his own safety. In the end, he may have paid a great personal sacrifice with his life, but his death strengthened the people’s resolve and determination to get rid of the Amin regime. There was no more doubt in anyone’s mind, in Uganda and outside, that Amin was a liability to the Country. Even those who had supported him in the beginning, for instance, the British, were alarmed that he could go that far to murder an Archbishop over differences in opinion. It is not surprising that two years after the murder of the Archbishop, Idi Amin was finally ousted from power.

Therefore, as you reflect on our tragic past, you should also thank the Almighty God for enabling us to correct the mistakes which stalled Uganda’s progress. Some Countries have failed to emerge from the mistakes of bad leadership. They got severely torn apart and have remained in an ungovernable condition as a result of the bad decisions of their leaders. There are many examples that one can quote. However, in the case of Uganda, we were able to rescue the Country from total collapse and redirect it on the path of stability and prosperity.

The fruits of liberation are now ripe in every sector of our society. Uganda enjoys unprecedented peace and stability. There are some few evil doers, like the ADF, who are puzzled by this great achievement. Their attempts to distract us from the work of building Uganda into a modern middle income Country have been decisively defeated.

The UPDF is determined to uproot any disruptive and negative forces inside or outside Uganda. Uganda’s rapid march towards the goal of socio-economic transformation cannot be stopped by anyone.

Finally, I wish to thank you all for remembering the life and martyrdom of Archbishop Janani Luwum. I urge you to guard the values and principles for which he laid down his life.

May the Soul of Archbishop Janani Luwum Continue to Rest in Eternal Peace.

I thank you all.