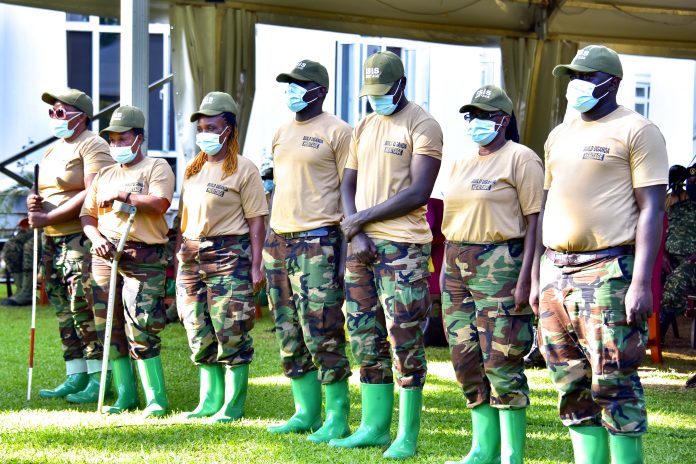 President Yoweri Museveni has lectured a team of 97 Wakiso district councilors who have just accomplished a leadership course at the Institute of Security and Intelligence Studies at Heritage, Garuga, on key issues on mindset change and development.

While tutoring the councilors at State House, Entebbe, the Fountain-of-Honor first advised them to guard against disunity through segregation, tribalism and greed which he said are a stumbling block to development.

H.E Museveni elaborated with the example of how products produced by a given tribe are not consumed by the same tribe.

“Me i am a Munyankole. I have cows which produce milk. My milk can’t be consumed by a Munyankole because we have the same products. My customers are people from other tribes like the Baganda and Basoga,” he said.

He expounded that some time back he discovered that a big number of people were doing subsistence farming forgetting that they needed money to cater for other expenses like housing and clothing. “After realising this, I visited some firms like Mbarara experimental and demonstration firm, Ankole-Masaka ranching schemes and Mbire stock farm, and I got some knowledge which I added on what I was taught and started to experiment with it. After confirming that this could work, I brought it on the ground through Government programs like Bonna bagaggawale which was attacked by selfish politicians. I realised that some Government programs were mismanaged and now brought about Parish Development Model (PDM)”

The President clarified that PDM will benefit those doing agriculture on small and big acres of land and assured them of the presence of market for goods.  He advised people with small pieces of land to concentrate on planting coffee, oranges, pineapples, and so on, which will earn them much money and those with big acres of land to do the above and also add growing maize, sugarcane, cotton, rearing cattle, among others .

The President revealed that the above are embraced under the four pillars of NRM namely; Patrotism,  Pan-Africanism, Socio- Economic transformation and Democracy, and urged the trainees to not only embrace them but also to pass them on to the masses they lead.

The Minister for the Presidency, Hon. Babirye Milly Babalanda, congratulated the leaders from Wakiso district for completing the ideological training. She recommended the leadership of Internal Security Organisation (ISO) for accepting to offer their facilities. She described this as an excellent contribution towards the struggle.

Hon. Babalanda reported to the President some leaders who have failed to play their part. She noted that majority of the Local Council leaders don’t know their responsibilities and are, therefore, misled thus distancing themselves from the people. As a result, she came up with this strategy of mind change training. She asked the President to help extend this initiative to other places were leaders prioritise politics above serving the masses.

The Minister asked the President to bless and support the initiative which he accepted.

Capt. Richard Tashobya Wazaarwa, the Commandant of the Institute of Security and intelligence Studies Heritage, said the institute trained 97 councilors for five weeks. Among them, 76 subscribed to NUP, 13 subscribed to National Resistance Movement (NRM), 7 subscribed to DP while one was Independent.

He confirmed to the President the positive response to the to the training by the Councilors. He added that this was further reinforced after a tour in Namunkekera Industrial Park in Nakaseke district as proof to them that the park is active as opposed to the ongoing lies by some opposition political leaders.

He opened up that the Councilors unanimously agreed to support Government programs and initiatives for the good of Ugandans in Wakiso district and else were in our country.