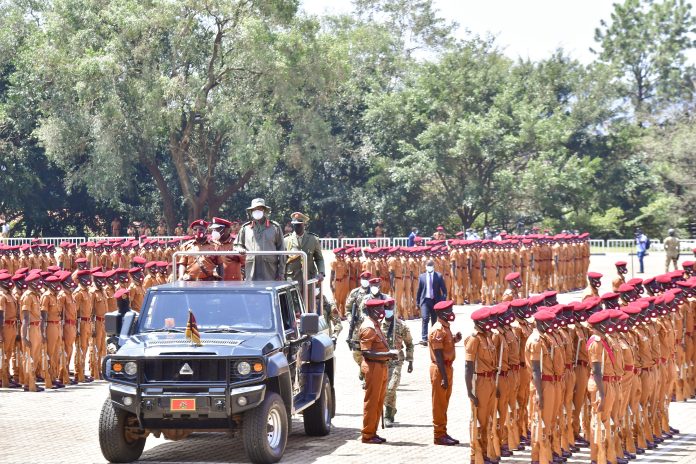 The President and Commander in Chief of the Uganda People’s Defence Forces (UPDF), Gen. Yoweri Museveni, has urged the management of Uganda Prisons and Police Forces to emulate the UPDF in the bid to secure the welfare and the future of the security personnel using cost effective methods.

Gen. Museveni made the remarks today at Kololo ceremonial grounds while officiating at the pass out ceremony of 2, 018 prisons warders and wardresses that comprised 554 females and 1, 464 males who have been undergoing an eleven months training course at the Prisons Academy and Training School.

H.E Museveni was responding to a call by the Commissioner General of Prisons, Dr. Johnson Byabasaija, for more accommodation for both staff and inmates in prisons, among other concerns.

The President noted that during a visit to Luzira prison last year, he had seen some good structures constructed by the prisons construction unit and called on them to utilise the same unit for putting up facilities across the country for the staff and inmates.

“If you can build houses, why can’t you build more prisons? Let’s stop the issue of crying for houses and buildings. The only demand should be for construction materials and may be recruiting more engineers,” he noted.

He also advised the prisons service to build primary and secondary schools as well as medical facilities for the biological children of the prisons officers where they can study free of charge and the Government pays salaries of the teachers, and also receive medical attention.

He pointed out that this will offset challenges faced by security officers of paying school fees for their children as well as medical care yet their salaries are inadequate.

H.E Museveni, however, commended the Ministry of Internal Affairs and the Prisons service for reinforcing the force with more human resource. He noted that the problem in many African countries has been conceptual pointing out that NRA/UPDF overcame that challenge by prioritising ideology. He added that with a small economy, UPDF managed to defend the country from retrogressive forces and has never called the United Nations (UN) to defend Uganda.

“ I tell my colleagues that ‘Can’t a poor man guard his house?’ The problem is a failure of analysis. We had problems from all over the place but we defended Uganda by ourselves.”

Gen. Museveni expressed his gratitude and satisfaction with the exemplary standard exhibited by the graduands whom he equally praised for being very smart in the parade. He congratulated the leadership of the prisons service and the commandant of the Prisons Academy and Training School, Assistant Commissioner of Prisons Brenda Sana, for churning out good products.

He further called on the prisons and police services to emulate the concept he used for the UPDF, a formidable force today that was built from zero to now an international force that has contributed to the restoration of peace and stability in several countries in Africa.

“I appeal to you to learn my technique; how I built an army that defeated many retrogressive forces and is now an international army that has contributed to the restoration of peace and stability in African countries. Listen to the success story and use it! I am telling you what I did in person,” he counseled.

The Minister of Internal Affairs, Hon. Maj. Gen. Kahinda Otafiire, welcomed the graduands into the prisons service noting that prisons today is a correctional center and not a place for punishment.

“I want you to treat these inmates as human beings and concentrate on behavioral change and lay emphasis on skills that can help prisoners after their term of incarceration,” he pointed out.

Hon. Otafiire also called for the increase in the budget for ICT use in the hearing of cases to lessen the burden of transporting inmates to  court.

The Commissioner General of Prisons, Dr. Johnson Byabashaija, thanked President Museveni for giving the green light for increasing the human resource in the prisons service.

He raised concern over the congestion of inmates in prisons noting that it increases the risk of the spread of various diseases and also strains the logistics of the prisons service.

Dr. Byabashaija assured the President that the growing of the cotton project  to meet the target of one million bales is ongoing and will be achieved as more land is under acquisition in several parts of the country.

“With your help, Your Excellency, I am sure we shall meet the target of  one million bales of cotton,” he stressed.

Addressing the graduands, he urged them to be disciplined. He also assured the President that the officers of the prisons services are very loyal and will always support Government’s efforts to elevate Uganda into a Middle Income country.

He urged graduands to be disciplined and to be ambassadors of the Prisons Service.

The Commandant of the Prisons Academy and Training School,  the first female Commandant ever at the academy, Assistant Commissioner of Prisons Brenda Sana, expressed optimism that the graduants will ably handle inmates professionally in whichever prisons they will be posted to in the country, and will churn out well rehabilitated prisoners upon release.

“They will handle inmates professionally while placing human rights at the center of whatever they do. I can comfortably say they are ready for the task ahead of them ,” she said.

She congratulated graduants upon successfully completing their course and encouraged them to be disciplined.

The best warders and wardresses during the eleven months training course received gifts for their excellent performance. They included Aryong Marshal Jude who was the overall best student while the best student in academics in the male category was Wolwenje Fred. Chemutai Flomena led in the female category.

The best male student in parade was Nyanga Eric Disi while the best female student was Christine Gassi.