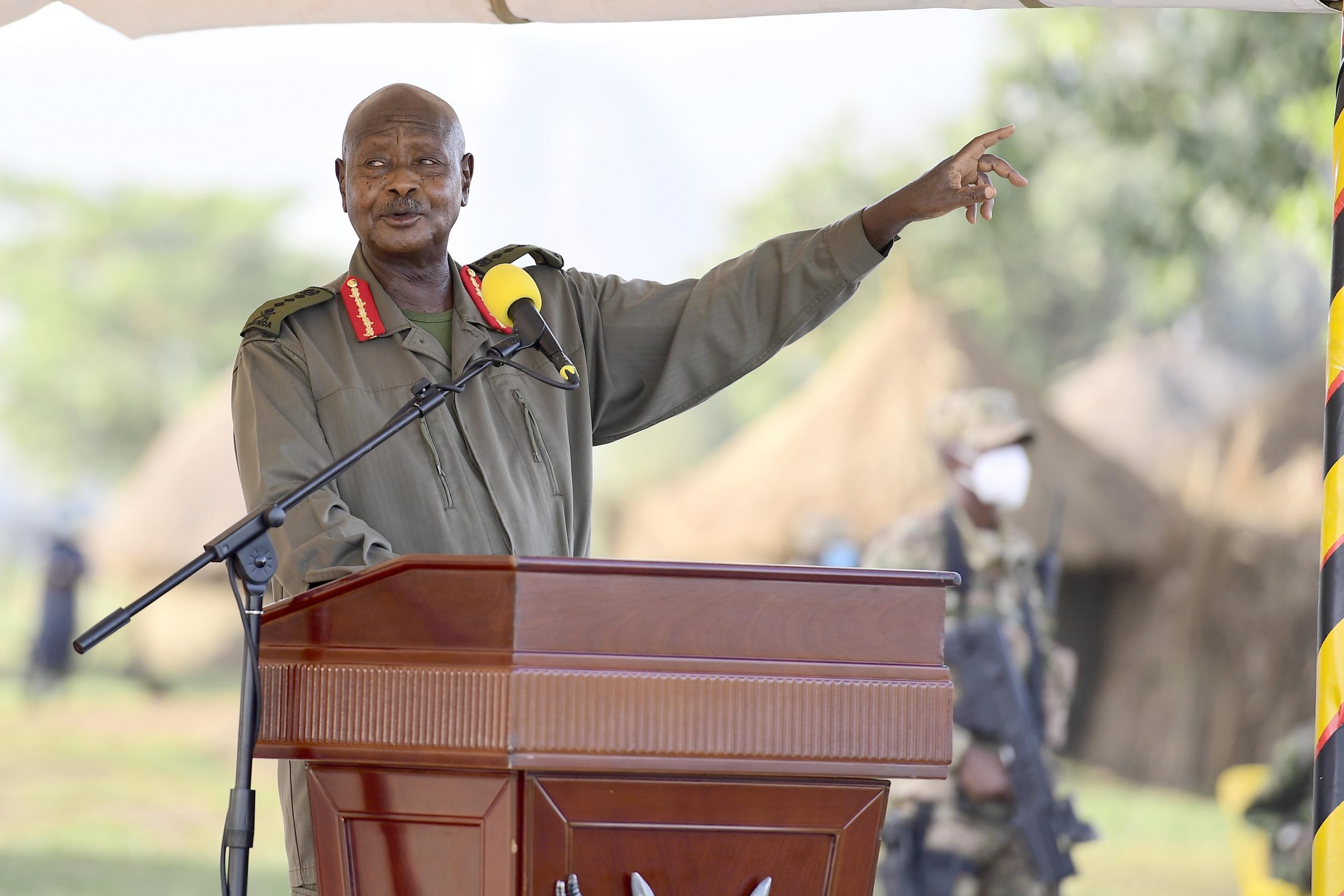 I congratulate all the Balamazi ( Pilgrims) who have trekked long and short distances to the Namugongo Shrines, for this year’s Martyrs Day .

I want to welcome the visitors to Uganda,, among the pilgrims, who have come to enjoy the blessings of this day with us. I wish you a memorable stay in Uganda.

After two difficult years of battling with the Coronavirus disease and other natural hazards like the locust invasion , floods etc. We have every reason to thank the Almighty God,, the anchor of our faith , for shielding Uganda from the nightmare of mass deaths,, as was sadly witnessed in some parts of the globe.. During the Covid pandemic , all gatherings were stopped to contain the spread of the virus ; but,, nevertheless, because God is omnipresent, believers continued worshiping and praying in their respective homes. Indeed, the Lord heard our humble prayers and spared our lives. If you remember, I encouraged you during the lockdown to read Isaiah , Chapter 26: Verse 20, which says: “ Go home my people and lock your doors!! Hide yourselves for a little while until the Lord’s anger has passed ”. Now that the Lord’s anger has passed and the virus has been defeated , believers are again at liberty to congregate and worship the Almighty God.

Martyrdom is a death that one suffers because of his or her beliefs or stand on an issue . These beliefs can be religious, political,, intellectual etc. For instance, in Ancient Greece, we are told that Socrates, an independent thinker and ardent seeker after truth, was made to drink a poisonous substance called hemlock, beca use he challenged the dogmas of his time.. Even Christianity is built on the martyrdom of Jesus Christ. He was subjected to a trial for saying that he was God and sentenced to death by hanging on a cross.

The African freedom fighters , such as Eduardo Mondlane of Mozambique;; Amilcar Cabral of Guinea Bissau ; Herbert Chitepo of Zimbabwe,, Patrice Lumumba of the Congo etc were killed because they believed and worked for the liberation of Africa from the shackles of colonialism.. They were political martyrs.

The Uganda Martyrs,, in particular,, were killed on account of their religious beliefs. They were executed on the orders of Kabaka Mwanga because they refused to renounce their faith in Christianity.. The fact that they were killed for believing in Jesus Christ i s the distinguishing factor;; otherwise, mass executions on the orders of the King were common.

The tribal Kings and Chiefs, who ruled Africa in the pre – colonial era,, had little regard for the worth and sanctity of human life.. Human beings were mere playthings in their hands.. Kabaka Mutesa I , for example,, was known as Mukaabya – “ a causer of tears .”” The Kings and Chiefs,, who were evidently cruel glory – seekers clothed in animal skins and accustomed to being addressed in high – sounding titles,, had little regard for human life.. This is why they permitted slave trade to flourish on African soil in exchange of trivial articles like mirrors,, swords,, cloths, plates, cups, guns etc from the Arabs. This evil trade depleted the African population . These Kings were also fond of carrying human sacrifices in the name of appeasing the gods . Therefore, the burning of the Uganda Martyrs to death was not an exception. The unique element in their death is that it was related to their faith.

Muslims were the first religious martyrs at Namugongo – a traditional execution ground .

An estimated 200 Muslims were killed under the reign of Mutesa I; before the explorer Henry Morton Stanley arrived at his Court in 1875. Kabaka Mutesa is said to have fallen under the influence of Arab traders . He embraced Islam and learnt some Arabic..

However , when a group of Muslim converts at the palace refused to eat the King’s meat because it had been slaughtered by non – Muslims ( Kaffirs ), Mutesa was infuriated and ordered for their death.. He feared that the exclusive tendencies among the Muslims would saw

seeds of rebellion.. Mutesa also refused to undergo circumcision, as is required of a Muslim man.

Mutesa’s refusal to completely convert to Islam meant that Muslim Egypt, with its expansionist ambitions to annex the territories along the head – waters of the River Nile,, would remain a hostile threat to Buganda. He had to seek allies elsewhere to build military capacity to counter this real threat.. Therefore, when Henry Stanley arrived in Buganda, Mutesa viewed hi m as a potential ally against the Egyptians .

He was not looking for missionaries, as was later misrepresented in Stanley’s letter to the Daily Telegraph in Britain. This is a crucial point because it created a mismatch in expectations between Mutesa and the missionaries,, when they finally arrived in Uganda.. The memoir of Alexander Mackay,, who was an agent of the Church Missionary Society, exemplifies this point. He writes:

“ I was asked why we came here,, and what we came to do.. I replied that we came in response to his (Mutesa’s)) own request to Stanley, that he wished white men to come and stop with him,, and teach his people the knowledge of God.. He said that he understood that we came to teach them how to make powder and guns, and what he wanted was men who would do so..” ( A.M MACKAY Pioneer Missionary of the Church Missionary Society to Uganda – 1893)

It is clear from the above quotation that missionaries ( teachers of the gospel ) were not the group which Mutesa anticipated to be sent from Europe..

In addition to the mismatch in expectations , as seen above , the rivalry between the Protestant s ( Wangeleza) and the French (Wanfransa ) was viewed with disdain by Mutesa .

Besides the tension between Ch ristians and Moslems,, Christianity was divided between Catholics and Protestants.. Mutesa saw this as a danger to the unity of Buganda.. Again,, Alexander Mackay helps us to see Mutesa’s understanding of this danger.. He wondered:

“Every nation of white men has another religion?”

Therefore, by the time Mwanga ascended the throne,, after the death of his father,, Mutesa I,, in 1884,, Buganda was at crossroads. First of all, the growing influence of Christianity was viewed as a threat to the tradition al norms and practices (eg polygamy , lubare worship etc) Christianity and Islam were at loggerheads ; furthermore,, the contradictions between the two Christian sects – i.e. Protestants and Catholics, were seen as a recipe for disunity; the European missionaries were suspected of spying on behalf of their respective countries,, they were viewed as pioneers of conquest ; the German annexation of territory at the Coast strengthened the suspicions;; and the entry of Bishop Hannington into Uganda through Busoga , confirmed another long – held suspicion that Buganda’s enemies would use the “back door” – Eastern route to conquer her.

This was a very complex situation for the young and inexperienced Mwanga. In an attempt to stamp his authority among his subjects and thwart foreign influences i n his domain , he chose the reactionary path of persecution and mass killings.. Bishop James Hannington became one of the first victims of the se murders on 22nd October,, 1885; the missionaries were also subjected to constant harassment and scores of Christians converts were captured and massacred in June, 1886.

However, these killings weakened Mwanga’s grip on Buganda; the hitherto divided camps of Christians versus Muslims,, Protestants versus Catholics,, were united by their common persecution and fought Mwanga with foreign backing..

The Muslims emerged powerful and enthroned Mwanga’s brother Kiwewe as a Muslim King.. However,, like Mutesa I, Kiwewe refused to be circumcised.. The Muslims forced him to relinquish the throne in favor of his brother Kalema, who embraced Islam.. Under Kalema, the Muslims sought to Islamize the whole of Buganda and wave of persecution against Christians swept across the country.

This fostered temporary unity between the Protestants and Catholics.. Ironically,, the defeated Mwanga appealed to the Christians to help him regain his throne with the promise of reformation from his old ways.. In a letter addressed to the missionary Mackay and Colonel Macdonald, Mwanga makes an earnest plea as follows:

“ I, Mwanga, beg of you to help me.. Do not remember bygone matters……restore me to my kingdom,, you will be at liberty to do whatever you like …Mr.. Mackay,, do help me ; I have no strength,, but if you are with me I shall be strong.. Sir,, do not imagine that if you restore Mwanga to Uganda, he will become bad again.. If you find me become bad, then you may drive me from the throne;; but I have given up my former ways,, and I only wish now to follow your advice.. ” ( A.M MACKAY Pioneer Missionary of the Church Missionary Society to Uganda – 1893)

In 1890, the Christians fought the Muslims and restored Mwanga to his throne. This is a brief sketch of the circumstances under which the Uganda Martyrs were killed.. We salute them for their steadfastness,, despite being new converts to the Christian faith. They paid the ultimate price of death at the hands of an insecure and paranoid Monarch. They did not die in vain.. Their fortitude an d endurance continue to win souls for the Kingdom of God.

This is why, every year , thousands of pilgrims trek to Namugongo from every corner of Uganda and outside our borders to emulate the Uganda Martyrs ’ spirit of sacrifice and total surrender to God..

Finally, I wish you all a blessed Martyr s Day and safe travel to your respective homes..