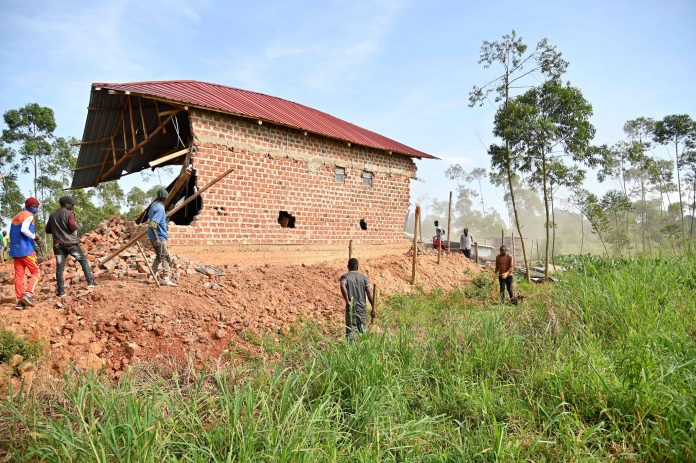 Over ten houses, including crops and other belongings of residents who impinged in wetlands of Butabika Hospital Village have been demolished by NEMA, Environmental police, ministry of water and environment, together with state house anti-corruption Unit and security.

Residents expressed concerns of not informing them in time so that they set themselves for the eviction.

However, their concerns were refuted by the officers from NEMA, saying that on several occasions they have been informing these people to vacate this place but all in vain.

The enforcements with the help of bailiffs started by demolishing houses, crops and other residents belongings which were found on this wetland.As all was unveiling some residents were nowhere to be seen

Among the houses demolished was the one for Abdu Mutyaaba the area defence.

However, before any demolition, resident’s items were first removed from house to avoid total loss.

According to ministry of water and environment other villages to be affected with the same move is part of Kasokoso, Kito, Mutungo Zone 4, Monkey city, and  Kasaawo, and they warned residents to vacate these villages before it’s too late. George Wamunga senior wetlands officer from ministry of Water and Environment, refuted the residents’ concerns.

As the evictions was going on the area Member of Parliament Ronald Balimweezo also visited the locus to ascertain what was going on, although all was in vain since 95% of the houses and crops were already down.

Balimwezo who agrees with the ministry of water and environment that this wetland was encroached on by residents, however, asked them to halt with the eviction.

By the time were left this place over ten houses were demolished.

However, it was a tag of war when officer’s wanted to vacate this place after the operation since residents had put fire in most of the roads including closing some routes to the main road with road blocks.

The land in question according to Ministry of land is over 11.5 square miles.