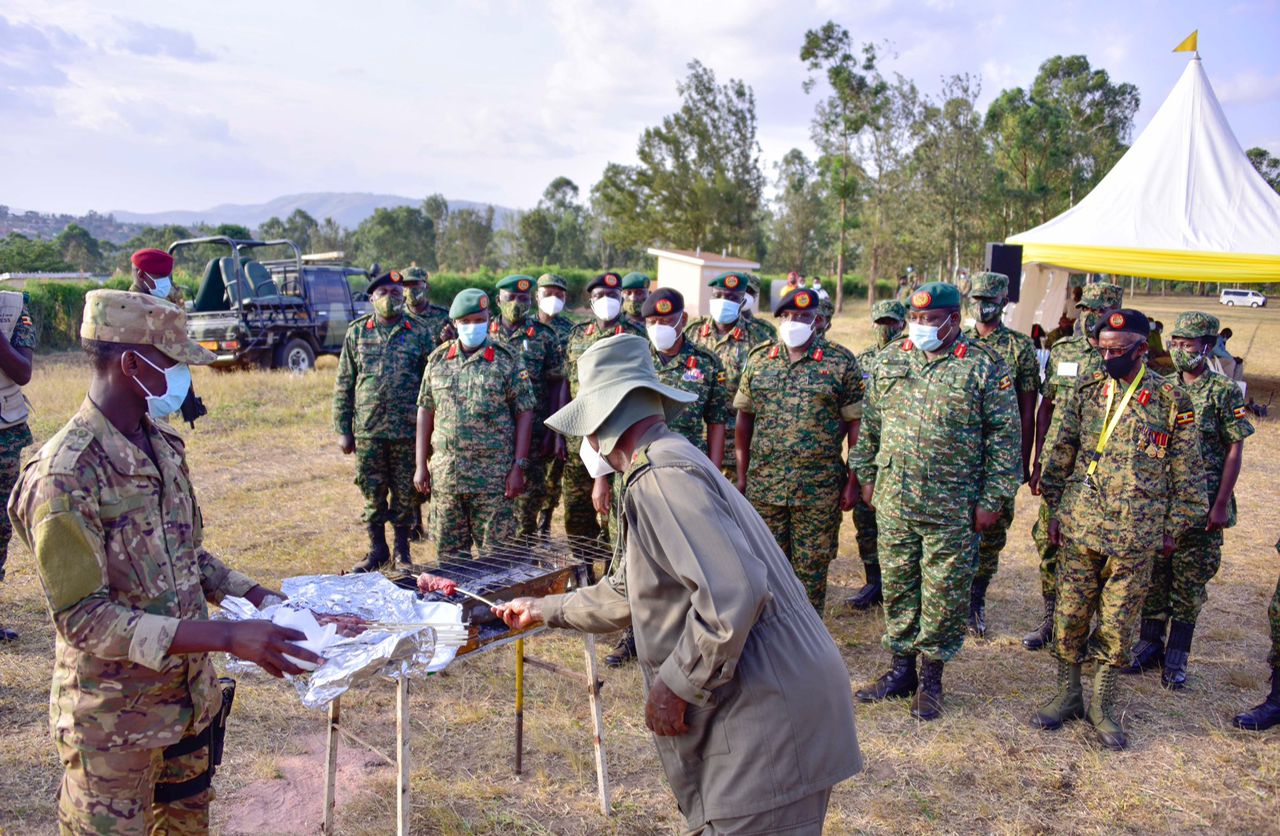 The President of the Republic of Uganda who is also the Commander-In- Chief (C-I-C) of UPDF, H.E Gen. Yoweri Kaguta Museveni, has commended the officers and men of the Second Division infantry headquarters for a job well done.
“I am happy to be here peacefully. In the past, around 1972, I used to come to attack this barracks when we were struggling for liberation. I want to congratulate you for doing your duty well because I don’t hear any problem this side,” Gen. Museveni said.
The President made the remarks this evening while giving an opportunity lecture to the Second Infantry Division at Makenke Barracks in Mbarara City.
The C-I-C advised the Division commander and UPDF as a whole to prioritise regular training of soldiers to acquire the necessary skills which will in turn give them confidence to perform their duties well.
“Regarding training, you should start with the individual soldier. The individual soldier must be confident. If you are very well trained you have confidence, as an individual soldier,” he said.
Once a soldier is trained well and gains confidence, Gen. Museveni said, and then you get them to the group of about three, then you combine elements to have a strong force that can defend any threat.
“In order for a well-trained individual to be affective, they need a group. This is the spirit we want in all of you. Don’t fear! Be confident! If you have confident infantry soldiers you succeed and win”.
On the challenges raised by the Division Commander, Maj. Gen. Francis Takirwa, that include establishing a Kadogo Technical Training School, fencing of the barracks land and establishing a reserve Brigade, President Museveni promised to handle them all because they are crucial issues.
“What I want to emphasize to you is that each soldier must be confident. But also he or she must know how to act in a group, and must combine arms. I am happy to be here. I just came to congratulate you, on a job well done,” Gen. Museveni said.
The Chief of Defense Forces (CDF), Gen. Wilson Mbasu Mbadi, welcomed the C-I-C to the 2nd Division Headquarters, and thanked him for building the UPDF into a formidable force that is widely respected around the globe.

“Allow me to take this opportunity to welcome you to the 2nd Division Headquarters to interact with these brave men and women charged with the defense and security here. We thank you for building UPDF into a formidable force that is now widely respected, ” Gen. Mbadi said.
He revealed that the UPDF administration is putting more efforts in all sectors to build a force that will become more effective and efficient and accountable to the population as long ago guided by the President.
“We also have plans of capacity enhancement in areas of training so that we can give our troops the knowledge and skills they require in their different areas of operation so that they can serve the UPDF better,” the CDF revealed.
On the issue of logistical support especially in the area of improving the mobility of commanders and troops, the CDF assured them of the Force’s willingness to support them for the effective performance of their work.
The Division Commander, Maj. Gen. Takirwa, revealed that the security situation within the Division area has been calm save for a few isolated cases of local criminality, theft and poaching among others.
“Also, the influx of Congolese refugees caused by hostilities continue to pose big security, social and economic threats to the region. However, this has been handled by screening of these refugees at the entry points,” Takirwa said.
He revealed that the Division intends to engage in large scale farming at Makenke, Kyamugashe, Kateretere and Ruhengyere. He also said that they want to intensify training in order to upgrade their readiness in various fields.
“We wish to appreciate your continued support and the guidance you have always rendered to UPDF”.
The Second Infantry Division is situated in South Western Uganda and borders with Tanzania to the South, Rwanda to the South West, and DRC to the west. The Division remains charged with the security of this region that covers 18 districts and Mbarara City.
Thereafter, President Museveni led soldiers to a bull roasting session.