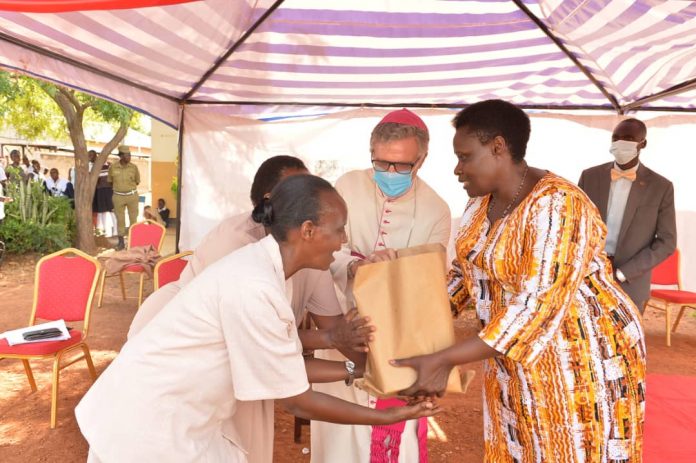 Beneath the Morulinga hills of Napak, and just a distance away from Morulinga State lodge, lies Kangole Girls’ Senior Secondary school, a missionary set up school that is in many ways, the education face of Karamoja region.

Located in Ngoleriet, Lokoreto Parish, Napak district, Kangole Girls School was founded in 1967 by the Catholic Diocese of Moroto. The school, run by the Sacred Heart Sisters is home to over 800 girls with both ordinary and advanced levels of education.

Today, as the school organized its fundraising drive, old girls gathered in their hundreds to celebrate the milestones of a journey that curved out great futures for most of them. The day attracted hundreds of other guests, well-wishers and, one in particular- Adong Omwony Florence, an old girl from the 1976 class present, was recognized and celebrated.

Joining the school today, and walking in with the strides of success was Vice President Jessica Alupo; student, old girl, alma mater S.2-2.4; 1989-1991.

Her story had already been shared in the school magazine, to which she was a contributing writer.
“In the third term of Senior 1, the Uganda People’s Alliance (UPA) rebels led by Peter Otai attacked our school Kidetok Girls Senior Secondary School-Serere and killed the S. 4 Physics Teacher Mr. Ebonait,  burnt his house and body in a gruesome way…,” Alupo wrote, “my father, the man of honour then brought me to Kangole Girls School”.

Perhaps, in nostalgic reflections, Alupo had shared her memories, writing briefly about the times, some of which are a reflection of what our country has gone through, and in many ways, today, a calling of the daily leadership decisions she must take-as Vice President.

In a short depth of ironic coincidence, a couple of weeks ago, the vice President accompanied the President for engagements to find lasting solutions to the peace question in Karamoja. The last of the peace meetings was held a stone throw away  at the state lodge  Morulinga, and here today, at Kangole Girls Secondary school, Alupo was sharing the experience she had lived- of cattle rustlers, something she wrote about in the magazine.

“I hold terrifying nights in Kangole girls; when the Bokora had raided the Matheniko and the Matheniko threatened to revenge by coming to destroy the school and kidnap the girls.  I recall that Rev. Sister Margy Conroy, the headmistress-brave and seemingly unworried, would move around in the night patrolling the school with her torch and all the girls would be indoors, which meant there  would be no reading preps that night….” Today, as her alumni magazine article was made available for all, and as the young girls listened to her amidst their own imposing loud silence, the whispers of inspiration went through the air. “I’m happy to be back here when the young girls don’t have to run away from raiders, when Karamoja is peaceful again…,” she said.

Incidentally, years later, like her physics teacher, Alupo’s father was killed by LRA rebels, something that substantially impacted her choice eventually to join the UPDF.  As the girls chanted out in loud cheers “Old girl!!!””, and as she acknowledged the shouts, the chants and the sheer of expression of joy, we took a moment of reflection to recognize the efforts of her colleagues in uniform to pacify the country.

20 years later today, as Alupo walked into the gates of Kangole Girls S.S, one couldn’t help notice the joy with which she reconnected with her past, standing firmly on her feet to express her joy at what the world had bestowed upon her, as a student of Kangole Girls; from student leader to national leader.

It was her mark of gratitude with which she gave a plaque to the school; “thank you for raising us to be the women that God has destined us to be, thank you for giving us wings to fly without fear…,” it read in part.

More than 20 years later, Alupo, the deputy headgirl-Kangole Girls’ S.S returned to her school to help in the fundraiser for the construction of a double floor dormitory, a cause she said she was happy to contribute to, for the school she said had shaped her foundation.

The Vice President received a rousing welcome-as a mother, an MP, and Vice President-Republic of Uganda and to the young girls; an alumni, an old girl, and for some, one, who only in the difference of years, shared a dorm and dreams.

Dreams, like Vice President Alupo wrote for Kangole alumni magazine are indeed valid.
A total of shillings 165.538.000 million was collected in today’s fundraising for the dormitory out of which shillings 60.000.000 million was from H.E YKMuseveni.