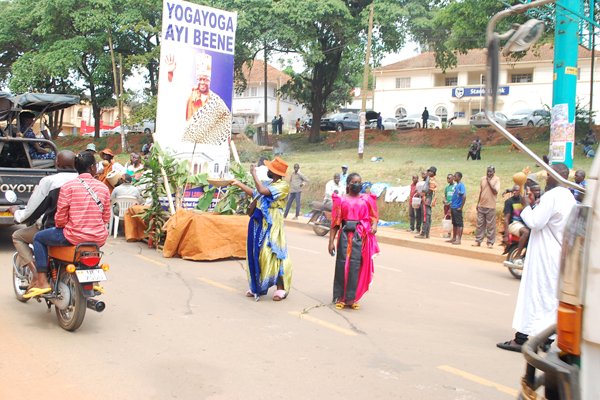 Traffic and business in Masaka city were Saturday paralyzed as people jostled to have a glimpse of Kabaka Ronald Muwenda Mutebi II upon his arrival to officiate at the launch of the 2022 Masaza Cup Football Tournament .

The Kabaka (king)arrived in the city at 2:30 pm to the excitement of his subjects, most of whom had been waiting on the roadsides for hours as they braved the scorching sun.

Huge crowds lined on the streets of Masaka City, many yodelling, blowing whistles and vuvuzelas or waving, as the motorcade of the Kabaka snaked to Masaka Recreation Grounds.

Before arriving in Masaka City, the Kabaka made several stopovers in townships along the Kampala-Masaka highway, waving to his ecstatic subjects.

In Masaka City, he disembarked his car near Dfcu Bank branch and walked a distance of about 200metres to the venue. The opening match is between the host –Buddu County and Mawogola County.

Earlier, Kabaka’s chief in the area (Buddu County), Mr Jude Muleke said all was set for the D-Day.

“All is set and many people are already pouring into the city to grace the occasion. We are grateful to the Kabaka for choosing Masaka Recreation Grounds as the venue for launching this year’s Masaza football tournament in our kingdom,” he said.

Kabaka last visited the area in July 2021 during his 28th coronation anniversary held at Nkoni Palace, on the outskirts of Masaka City.