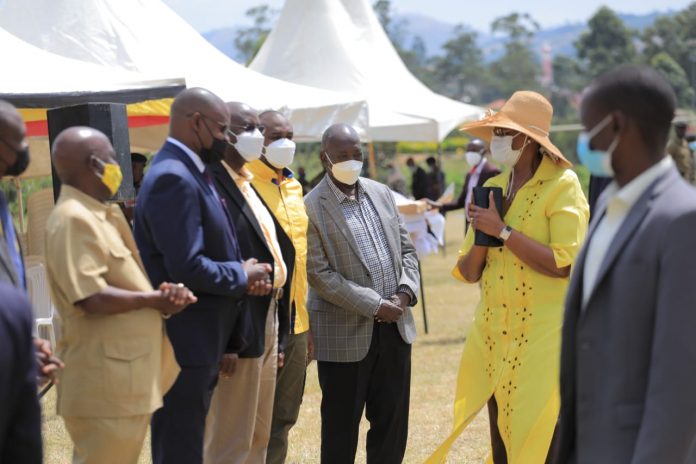 The First Lady and Minister of Education and Sports Mrs. Janet Museveni has implored Local Government leaders at all levels in Ntungamo District to ensure that the Parish Development Model program is effectively implemented so that Ntungamo becomes a model district in the country.

“Through the PDM, the NRM government has diagnosed the problem of poverty eradication for everyone and if the program is implemented properly, it will develop all parishes and the country at large”, she said.

Mrs. Museveni was officiating at the roll-out of the Parish Development Model sensitization meeting for different categories of leaders and in Ntungamo District on Monday 27th June 2022 at Kyamate Playground in Ntungamo Municipality. It was attended by over 280 participants that comprised of Greater Ankole Cabinet Ministers, area Members of Parliament, members of Ntungamo District Executive, Security Committee, NRM district Committee, District Heads of Departments, Members of the Special interest groups: women, elderly, youth and persons with disabilities among others.

She urged the leaders to take charge and ensure that the communities are trained for maximum success of the PDM.

Janet Museveni said, “Ugandans are mostly hardworking people, but the problem is that the extension workers do not reach the grassroots to impart adequate knowledge and necessary skills to the people.” She therefore appealed to the present leadership of the Ministry of Agriculture, Animal Industry and Fisheries to ensure that the Extension system now efficiently works.

She noted that to date as Ukraine, which is the largest producer of cereals in the world is at war with Russia, Africa should have the world’s largest food basket, but it is surprising that Africa is currently in need of bread and food generally speaking. She said Africa should wake up to produce enough food for their families, and to feed the world. It is our turn to play that role.

She reminded the people of Ntungamo that when she was still the MP for Ruhaama, she yearned to witness full development. “So, I am here to remind you that it will not be befitting to associate with whoever fails the PDM objectives because he will be an enemy to the community. If you fail, you will never see me here again. It will be a shame to all of us. Ntungamo district should be a role model with PDM speaking for itself”, she emphasized.

Maama Janet also encouraged the leaders involved in the implementation of the PDM program to be committed and ensure that the young generation become open minded and can be able to identify the critical obstacles against national development.

Mrs. Museveni also appealed to the Arts subjects teachers still on strike to return to duty immediately. “Teachers, be the disciples you are supposed to be to our country and the shepherds to our children. I have said this time and again, though the media has failed to capture the matter. Teachers, you have betrayed Uganda as a country and government”, she said. She further noted that teachers should instead have been sympathetic to the children who lost two years of education since 2020 when the COVID-19 pandemic ravaged the world.

The education minister further observed that it has been unfair for Arts teachers in public schools to hold government at ransom for salary increment yet not only has government been giving salary increments since 2016, but also faithfully paid their monthly salaries when teaching was hardly taking place for almost two years due to COVID-19. “So, I am surprised that they (UNATU) continue to be negative,” said Maama Janet.

She called upon the district local leaders to appeal to teachers in their respective areas to call off the industrial action and return to duty. “Government will be able to handle pay enhancements step-by-step in a phased manner starting with Science teachers for now.”

Delivering the keynote remarks, the lead minister for PDM in Greater Ankole; Hon. Frank Tumwebaze, the Minister of Agriculture, Animal Industry, and Fisheries noted that for the first time Government has set aside over a trillion shillings in PDM which is a community development program at the grassroots.

He said that President Museveni is championing PDM, which he officially launched in February 2022 in Eastern Uganda as one of the most pertinent components that are embedded in the Presidential Manifesto for the term 2021-2026.  The program aims at helping people at parish level to increase the incomes for 39 percent of households that are still outside the money economy.

Tumwebaze said that PDM, like the Universal Primary Education (UPE) will be a success in Uganda and all it requires is to effective mass awareness.  He said that people should stop castigating government for failure to eradicate poverty through programs like the Entadikwa fund, NAADS, OWC, but hold responsible the individuals who fail such government programs during implementation. “Otherwise, how would the government be able to reduce the proportion of households that are outside the money economy from 68 percent in 1986 to 39 percent to-date?”, Tumwebaze wondered.

The Minister of Trade, Industry, and Cooperatives Hon. Francis Mwebesa reiterated the need to understand and streamline government programs. He saluted President Museveni for his clear mindedness to spearhead the country to unquestionable and visible socio-economic development. “All these achievements were initiated by the NRM government to fulfill its commitments since 1986”, he said. Hon. Mwebesa was optimistic that the PDM program will register success if it is not frustrated by leaders.

The Minister of State for Agriculture, Animal Industry and Fisheries in charge of Animal Husbandry; Hon. Bright Rwamirama reminded the leaders that the 1986 NRM Ten-Point program encompassed major area for Uganda’s development that include Patriotism, Pan Africanism, Democracy and Socio-Economic Development under which PDM falls today.

“NRM has trimmed poverty levels from 68 percent in 1986 to 39 percent in 2022. This PDM program will be a success”, Rwamirama said. He further asserted that, “No country and government south of the Sahara has ever sunk a fund to the grassroot like the government of Uganda has done at the level of the Parish”.

During the training program, officials from Ministry of Local Government and Ministry of Gender, Labour and Social Development also urged the local government leaders to ensure that there is mindset change among the people. They referred to PDM; the President’s dream and brainchild, as a ‘gift from God for Ugandans’.

Giving the status report on progress of the PDM in Ntungamo District, the CAO Nasser Mukiibi observed that there are 31 local governments, 3 Municipality Divisions, 129 Parishes, 6 Wards, and 5 constituencies in the district. He reported that 129 SACCOs for PDM have already been formed and duly registered with the Registrar for Cooperatives under the Ministry of Trade, Industry, and Cooperatives.

Furthermore, Mr. Mukiibi reported that 65 parishes have already received PDM funds from the Shs. 1.105 billion the district has received from the Central government. He together with other speakers urged leaders to utilize Radio talk shows to mobilize and sensitize the community about PDM in the district.