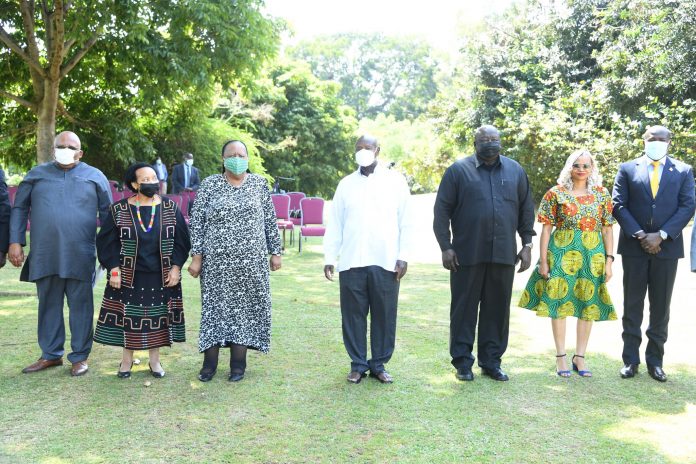 President Yoweri Kaguta Museveni met and held discussions with the South African Minister of International Relatios and Cooperation, Hon. Dr. Nalendi Pandor.
Accompanied by the South African High Commissioner in Uganda H.E Lulu, Xingwana, Minister Nalendi called on the President today Tuesday at State House Entebbe.
The South African Minister of International Relations and Cooperation also brought a special message to the president from H.E Cyril Ramaphos of South Africa.
President Yoweri Kaguta Museveni commended the active cooperation that exists between the two brotherly countries of Uganda and South Africa. He adds that if African countries work together, they will develop the continent.
“Thank you so much for coming and for reviving this cooperation, we need this brotherhood. I tried to encourage active cooperation and that is why I sold a Uganda Government Bank called Uganda Commercial Bank and sold it to Stanbic. The reason was I wanted a South African ANC linked company to run it”. President Museveni said.
The President said however, that such companies like MTN, Stanbic etc. should widen their scope and also go into Agro-processing mineral process
“Even MTN, when they came I told them that there are bigger sectors like Agro-processing, Mineral processing that they can go into” Mr. Museveni said.
“Am very glad you have come to revive this, we are ready to work with our African brothers including South Africa, so that we widen our economies”. He said
On the issue of security, President Museveni said that if Africa work together there is no problem they couldn’t solve by themselves. “There is nothing we can’t do if we cooperate”. He said.
Giving and example of Libya, President Museveni said that if Africa had cooperated in unity, Ghadafi would not have been thrown out. “Up to now Libya is in chaos, it is disgusting!”. President told his guest.
Mr. Museveni appealed to the South African businessmen and investors through the minister to come and invest in Uganda. He said Uganda is peaceful and a very conducive environment to do profitable business.
The South African Minister for International relations and Cooperation Hon. Dr. Nalendi Pandor thanked President Museveni for according her and her delegation the opportunity to discuss cooperation between Uganda and South Africa.
“Thank you for meeting us. We were impressed by your speech at the just concluded CHOGAM in Kigali, Rwanda”. Hon. Nelendi said.
Hon. Dr. Nalendi Pandor revealed that Uganda and South Africa are initiating a programme to cooperate in different fields like legal assistance, Agriculture, Tourism among others.
“We are initiating a programme between Uganda and South Africa. We are looking at Visa waver to increase tourism and trade between our countries. We agreed with the Minister that we need to do more, and in Uganda We have agreed to do more in agriculture especially in agro-processing”. She said.
Dr. Nalendi Pandor said that South Africa and Uganda can play an important role in uniting Africa, “We believe in you Mr. President and President Ramaphosa to silence the guns and have peace in Africa”. Dr. Nalendi said.
The State Minister of Foreign Affairs, Hon. Okello Oryem revealed that Hon. Dr. Nalendi Pandor unveiled the Nelson Mandela statue in Naboole today.
“This morning she was at Nelson Mandela stadium, and unveiled the Mandela Statue. She was in Kaweweta for a tour”. Hon. Oryem said.
The South African High commissioner to Uganda, H.E Lulu Xingawana, State Minister of Foreign Affair of Uganda Hon. Okello Oryem among others, attended the meeting.
END