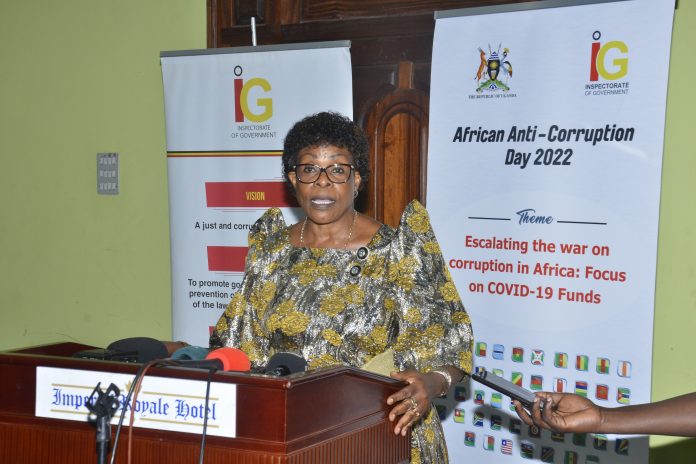 The Inspectorate of government has changed the focus on the war against Corruption by taking it to the foot soldiers through massive sensitization.

The Inspector General of Government Beti Kamya Turwomwe says there is need to end the too much air Conditioned boardroom engagements for technocrats but rather engage the masses.

Beti Kamya said that by doing so the corrupt may forgo swindling public funds.

“Questions around how to conquer corruption are the reason the African Anti-Corruption Day was delegated by the African Union, to shift Africa to throw back on the causes and effects of corruption then work out solutions to end it and consequently redeem us from the chains of this subjections,” says Kamya.

Beti Kamya says AFRICA is estimated to lose 140 billion dollars in Corruption according to the African Union but when the masses appreciate that poor service delivery is caused by corruption, they will rise up to fight.

“When the masses understand that all the  140 billion dollars which we receive from the West in loans, grants, and aid ends up in a few people’s pockets, it will be them and their descendants to pay it back with interest. They will rise up to save that money. When we disclose corruption as that mysterious wealth, not in line with a public officer’s familiar source of income, they will stand up to safeguard their wealth,” she noted.

The Deputy Inspector General, Patricia Achan Okiria, called for a united continental approach towards the fight against corruption.

“We need to have cooperation, proper coordination through the African Union committee. This means that after this meeting it is very important to put the report together and share with AU,” she said.

Different Ambassadors, civil society organizations academia among others from different Countries attended the 6th Edition of the Africa Anti-Corruption Day.

The day was celebrated under the theme Escalating the War on Corruption in Africa: Focus on Covid—19 Funds.