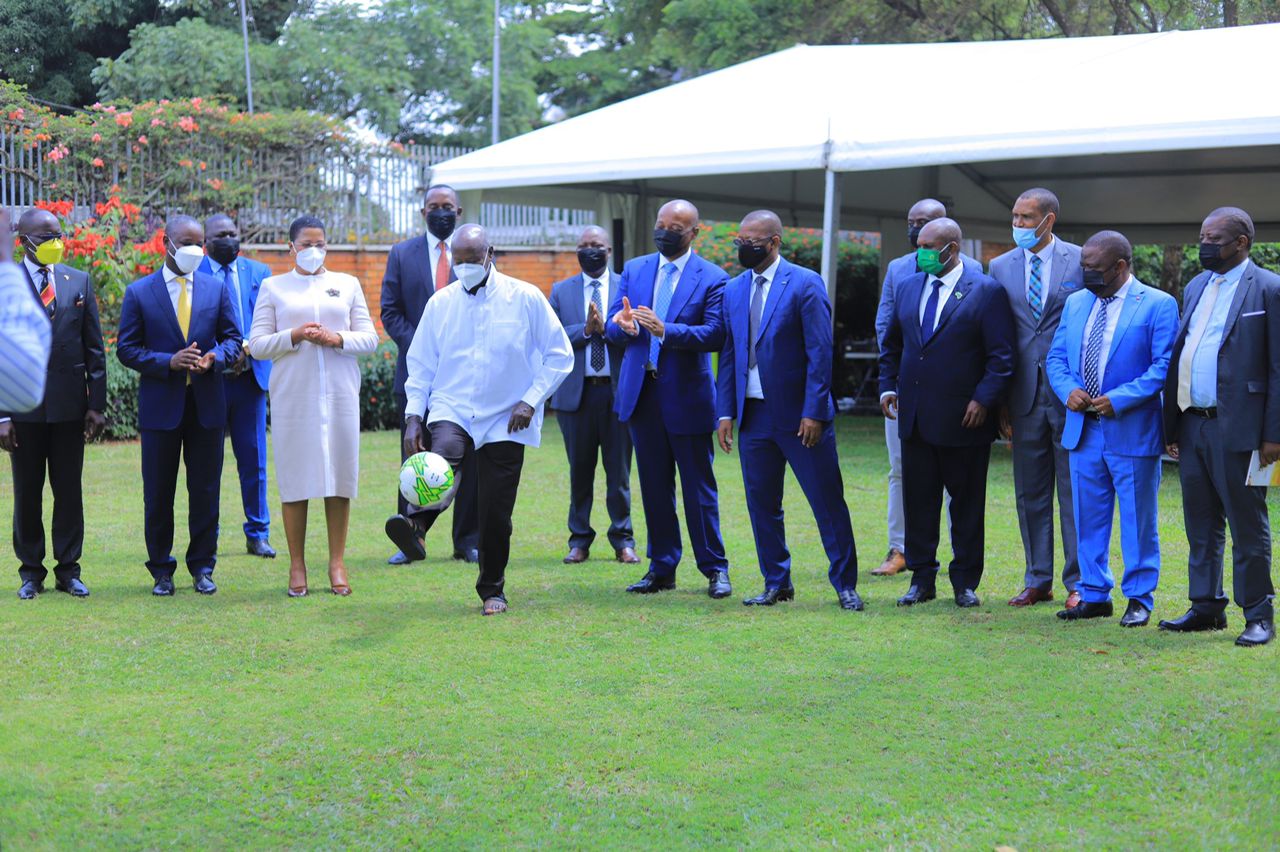 President Yoweri Kaguta has received and held discussions with the President of the Confederation of African Football (CAF), a South African billionaire businessman Dr. Patrice Tihopane Motsepe.
The First lady and Minister of Education and Sports Hon. Maama Janet Kataha Museveni was represented by the State Minister in charge of Sports Hon. Hamson Obua to receive the CAF President who is in the country for a two-day visit.
The meet organized and attended by the Speaker of Parliament Hon. Anita Among Annet took place today Friday at State Lodge Nakasero, and was attended by among others FUFA President Moses Magodo, Deputy Speaker Thomas Tayebwa.
President Yoweri Kaguta Museveni while addressing his guests revealed that the sports sector has been receiving little support because the economy had collapsed during Amin’s and after reviving it the concentration was put on infrastructural development that has helped to grow the economy.
“When we came into government in 1986, Uganda had collapsed, so our immediate intervention/mission was to bring revive the economy. Now that the economy is doing better, we shall put more support in sports”. President Museveni said.
The only big support we have given to sports, the President says is peace. “Because of the peace in the country, many young people are coming up by them selves”. He said.
President Museveni promised more support to the sports sector and say that when government commits, it will commit big. “On the issues of football, we have not yet supported you as we want, but we are going to give you more support” He said.
On the support given to the African National Congress (ANC) in South Africa, President Museveni said they had to support our African brothers to defeat the Apartheid.
“I started supporting ANC in 1967, with ANC’s representative in Tanzania. We were students that time and working closely. That’s when I started supporting ANC. When we came to government here we continued with the support”. He added.
The President of the Confederation of African Football (CAF), Dr. Patrice Tihopane Motsepe said that South Africa will never forget the sacrifice and contribution that President Museveni and the government of Uganda gave to them during the struggle for freedom.
“We want to thank you for your sacrifice and contribution in our struggle. We have got a special attachment and bond with you. I was even told that Madela had a Ugandan passport. We are truly grateful”. Dr. Patrice Tihopane Motsepe said.

He commended the President and Ugandan government for supporting support saying that sports unites people. He appealed to teach our children that the unity of Africa will develop the continent.
“Today we came to talk about football, The President of FUFA always praises your support for sports especially football. Thank you for your love for football and request to continue with the support and Love. I want to conclude by thanking your for your inspiration leadership, economic growth, peace and stability and the support for foot ball”. Dr. Patrice Tihopane Motsepe said.
The Speaker of Parliament, the Right Hon. Anita Annet Among said thanked President Museveni and First Lady for their contribution towards sport. She adds that Football unites the community regardless of their political or tribal affiliation.
“Football is a uniting factor. It knows no political, social, tribal affiliation. Thank you and maama for your contribution towards sports”. Hon. Anita Among said.
Hon. Anita Among said that they have so many young in the Ghettoes who have talent and they just need support to develop them.
FUFA President Hon. Moses Magogo, commended government for the continued support given to them that has seen their performance grow over the years.
“I take this opportunity to thank you so much for hosting us and hosting CAF President. Thank you for your support to football”. Eng. Moses Magogo said.
The meeting was attended by; the Minister of State for Sports, Hon. Hamson Obua, Deputy Speaker Hon. Thomas Tayebwa, FUFA President Moses Magogo among others.
President Museveni and First Lady were thereafter given accolades and gifts in recognition of their contribution towards sports.