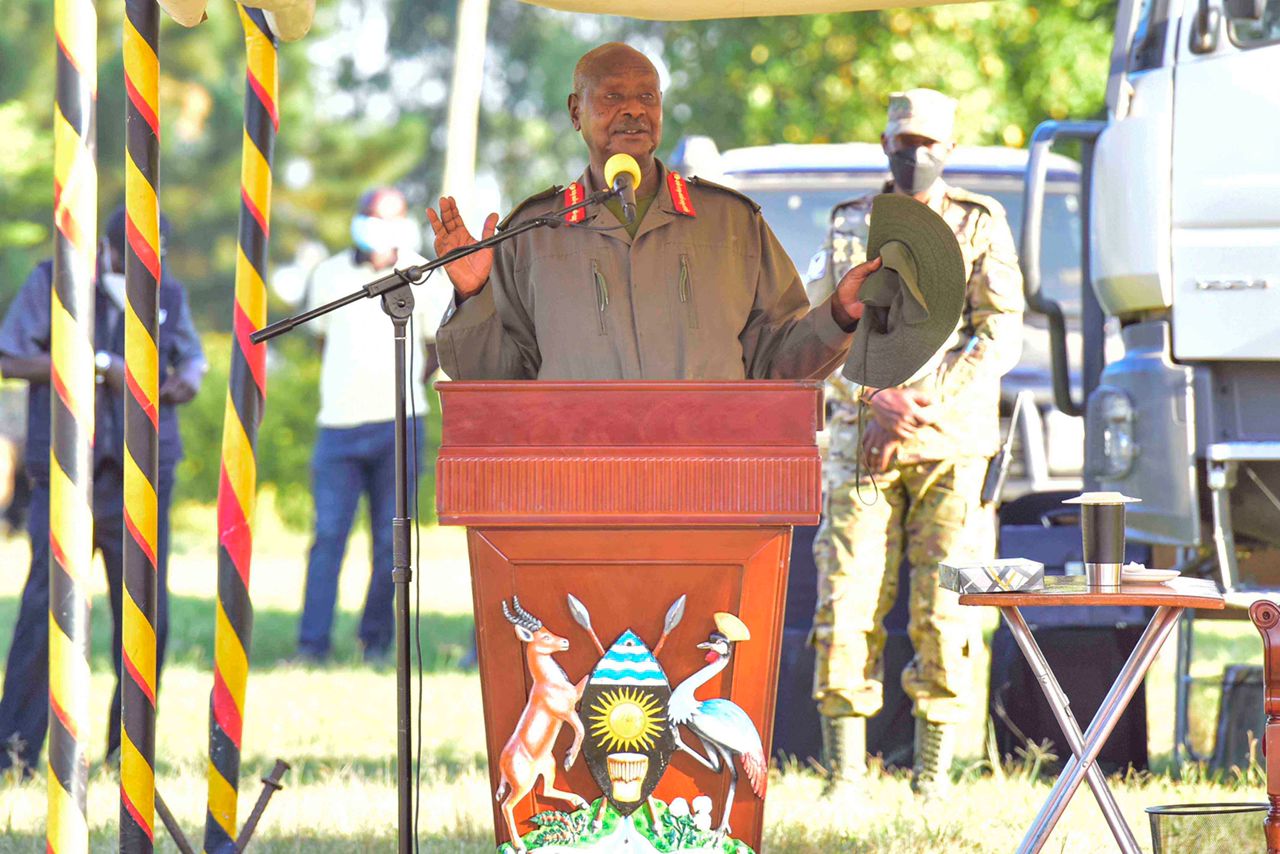 President Yoweri Museveni who is also the Commander in Chief of the Uganda Peoples Defence Forces (UPDF) has assured the army that the issue of salary enhancement will be handled gradually as the economy improves.
“Initially we planned to have a Private earn the same as a grade three Primary school teacher. At the time, the ones from Major up were not touched. Now we have increased from Major to General. As the economy improves, we shall keep on moving until we handle all,” he said.
General Museveni was yesterday officiating at a pass-out ceremony of over 100 platoon commanders and over 450 Armour crew graduands at Armoured Warfare Training School Karama in Mubende district. The commanders were trained in Armour gunnery, Combat driving, armour design and maintenance, communication, tactics, political education, Military health international Humanitarian Law, military war and Mine warfare among other things.
The President heartily congratulated the leadership of the army for implementing his directive of using a combined approach while training a force that can annihilate the enemy with strategic precision.

“I want to congratulate the Commanders and all of you. When I advise you, you listen and you implement. You must use all the combined elements to subdue the enemy. I congratulate you. You were very accurate, hitting targets during the exercise! I didn’t see any body missing. Therefore we are moving very well,” he observed.
General Museveni had prior to his remarks witnessed a spectacular military exercise by gradunds that also involved other sections of the army including the air and land forces and tank artillery.
He described as substandard attacks on the enemy of using only a single element tactic ‘like a person eating cassava without sauce and drinking water’ citing the recent case of rounding up cattle rustlers in Karamoja sub-region where soldiers where using ‘fata nyayo – follow the footsteps”.
“If you eat cassava or millet food alone, you can die. You need sauce and water, if not it will send you to hospital. You also need salt and all spices to make the sauce nice. In order to eat properly you need combined elements. So it is with war, you need a combined assault,” he counseled.
General Museveni added that with this type of training, the army is finally getting into the system and culture of a real revolutionary army.
General Museveni strongly advised graduands to mind their health by avoiding situations that can end their life prematurely like alcoholism and immorality.
The Deputy Chief of Defense Forces (CDF) Lt. General Peter Elwelu thanked President Museveni for always supporting and guiding the army in order to achieve the historical mission. He also thanked the Commandant of the school for a job well done and congratulated the graduands upon successfully completing their course.
The Commandant of Karama Armoured Warfare Training School Colonel Jackson Kajuba said the core objective of the course was to produce armour commanders and armour crews capable of executing their duties effectively and efficiently in all conditions. He added that the school endeavors to produce ideologically clear officers and men who understand the importance and the value of the people.
The Colonel further said that the aim was also to inculcate into the graduands the culture of creating wealth through individual or group activities.
The ceremony was attended by senior military and Government officials.
Others present included district leaders from Mubende and Kyegegwa, religious leaders and the neighboring community.
General Museveni later a warded gift to the best performers in all categories.
The recipients included Lt. Juma Mulebe as the best overall student.
Others were Lt. Juma Musizo, Private Akello, Pte Ahurira Erisa, Pte Charles Lochap, Pte Hosea Onaba, Pte Hassan Haruna, Pte Godongo David and Lt. Sunda katsigazi.