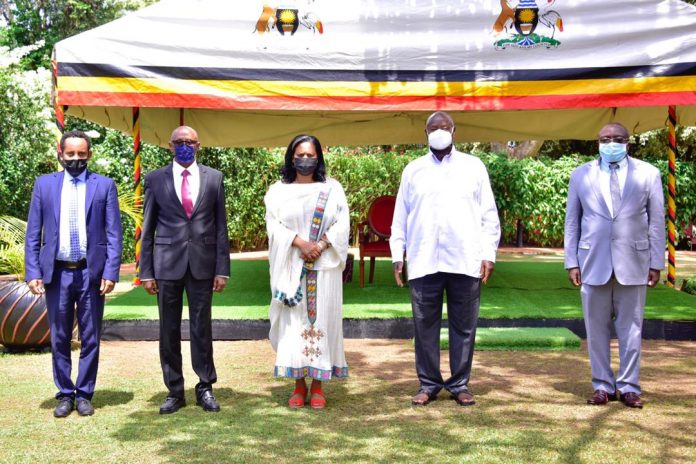 President Yoweri Museveni has this morning received and held talks with the Ethiopian Ambassador to Uganda, H. E Alemtsehay Meseret Gelaw, who called on him at State House, Entebbe.
The President and his guest discussed bilateral matters pertaining to the two countries. They also discussed the economic and security situation in the region.
“The correct thing is dialogue so that all concerned will have a win-win situation,” President Museveni observed.
On her part, H.E Gelaw conveyed to President Museveni and the people of Uganda her condolences upon the demise of several people in the recent flash floods in the Eastern part of the country, attributing the incident to global warming.
“Your Excellency, I also wish to extend to you and to the people of Uganda my condolences upon the death of some Ugandans in the floods. This is partly because of climate change,” she noted.
The envoy expressed the need to increase the volume of trade between Ethiopia and Uganda, especially in the sector of dairy products.
Amb. Gelaw also hailed the cultural exchanges between Ethiopia and Uganda, citing the recent visit by the Ugandan cultural group to her country, adding that “their performance in the Capital Addis Ababa was very impressive”.
“It was very wonderful,” she noted.
The envoy was accompanied by officials from the Ethiopian Embassy in Kampala.