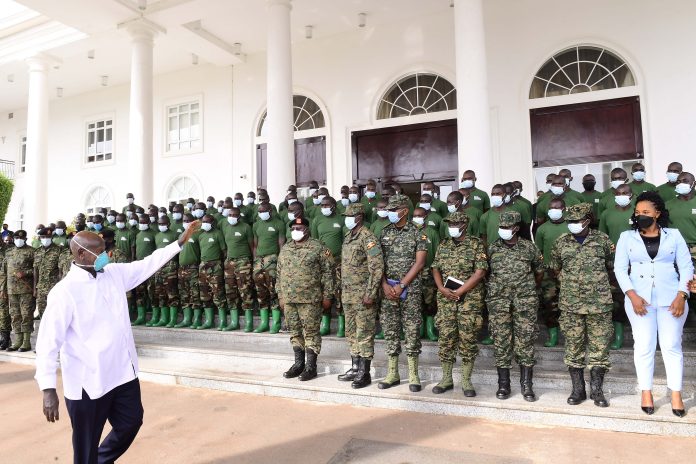 President Yoweri Museveni has met a group of 91 youths, formerly supporters of National Unity Platform (NUP) political party, who have been undergoing mindset change and leadership training at the Institute of Security and Intelligence Studies.

According to Col. Charles Oluka, the Director General of Internal Security Organisation (ISO), part of the 91 were commanders of different NUP youth-led groups who took part in the November 2020 riots and demonstrations around Kampala during and after the electioneering period.

While briefing the President, Col. Oluka said the group was taken through political education and ideology training including the NRM ideological pillars of Patriotism, Pan-Africanism, Socio-economic transformation and Democracy. Other areas were about revolutionary methods of work, mindset change, leadership and discipline, politically- motivated crimes and their dangers, among others topics that made them change agents in their respective areas.

“Your Excellency, I can assure you that the time they have spent with us has not been put to waste. They are now very different people. Today, they speak the language of Nationalism, Pan- Africanism, development and not destruction of their own country and livelihoods of their own brothers and sisters,” Col Oluka said, adding that they plan to use the same approach and organise similar orientations for groups in other parts of the country.

President Museveni welcomed the group and urged them to avoid taking part in acts of violence, saying they are only causing problems for themselves. He also called upon them to desist from politics of identity that is mostly based on tribes and religions, saying it is counterproductive and diversionary.

The President who also lectured them on the four Ideological pillars of NRM said the party, from the onset, emphases prosperity of all Ugandans without segregation, and not destruction.

“The second aspect is the security of our people and prosperity. Ensure that there is no crime, because life is most important. If we work and there is looting and riots, how shall we develop?” Museveni noted.

The group leader, Mr. Ssebugwawo Ahmed, who introduced himself as “Gen. Kikankane”, the commander of land forces in NUP, confessed to the President that at the time of arrest, they were determined to disrupt his swearing-in-ceremony at Kololo by staging riots across Kampala on orders of their leader, Mr. Kyagulanyi.

“We were also preparing to swear in who we thought was our leader at that time, Robert Kagulanyi Ssentamu – Bobi Wine. They told us so many things and promised us heaven and earth if we managed to execute the mission of making him President and delivering him to the State House. We had a saying in Luganda that ‘Tugenda Ntebe muntebe’ (We are going to the seat of power in Entebbe) but we can no longer return to that side because we are now where we wanted to be (in State House), the promised land,” Ssebugwawo told the President.

Ssebugwawo and the group thanked the President for equipping them, through ISO, with so much knowledge about their country and their role in development. They promised to mobilise fellow youths in Kampala to keep peace and desist from violence.

Col. Oluka told the President that the same training has been extended to another group of 101 councilors from Wakiso district.

Out of the 101 councilors, he said, 80 subscribe to NUP, 13 to NRM, seven to Democratic Party (DP) while one is an NRM-leaning independent.