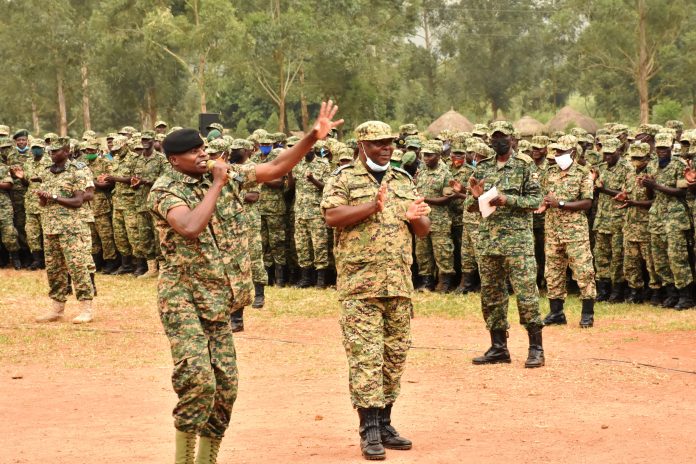 The Chief of Defence Forces Hon Gen Wilson Mbasu Mbadi has officiated at the send-off ceremony of Uganda Battle Group (UGABAG) XXXV at Peace Support Operations-Training Centre (PSO – TC) in Singo, Nakaseke district. The group is set to deploy in Somalia under AMISOM this month.
Gen Mbadi appreciated the group for offering to serve in the spirit of patriotism, urged them to maintain discipline and keep Uganda’s flag flying with honour, while in the Horn of African country.

“Do the right job when you reach Somalia and make sure you return safely. Al-Shabaab is a big problem. You have to be so vigilant and make sure they have no freedom to create more terrorists,” said Gen Mbadi.

He further encouraged troops to practice what they have learnt while in Somalia, since they are literally Ambassadors of Uganda in Somalia.

“UPDF is built on the fundamentals of discipline and selfless service. Be good will Ambassadors while in Somalia,” he added, urging them not to shame the nation but rather hold Uganda’s flag higher.

The CDF cautioned troops against irresponsible behavior which can lead to them to contract diseases like HIV/AIDS, Hepatitis and the current global COVID-19.

The Army chief further commended the training partners at PSO – TC from US, United Kingdom and France for contributing in building the capacity of UPDF troops enroute to Somalia, saying such trainings brighten one’s war experience for present and future operations.

He closed the function by mentioning that over the years UPDF has built its capacity to defend the territorial integrity of Uganda and contribute to regional stability.

The Commandant of PSO – TC Brig Maximus Gumisiriza commended BG XXXV for being determined and focused.

He encouraged soldiers to maintain discipline, professionalism and flexibility while in Somalia.

The Chief of Defence Forces was flanked by the RDC Nakaseke District Fred Bamwiine, the Commander of the 1st Infantry Division Maj Gen Sam Kawagga, training partners, local political and religious leaders, among others. UGABAG XXXV commenced the pre-mission training on 1st October 2021 and will relieve UGABAG XXXII, as part of the routine rotation of troops in the mission area in line with the mission requirements.