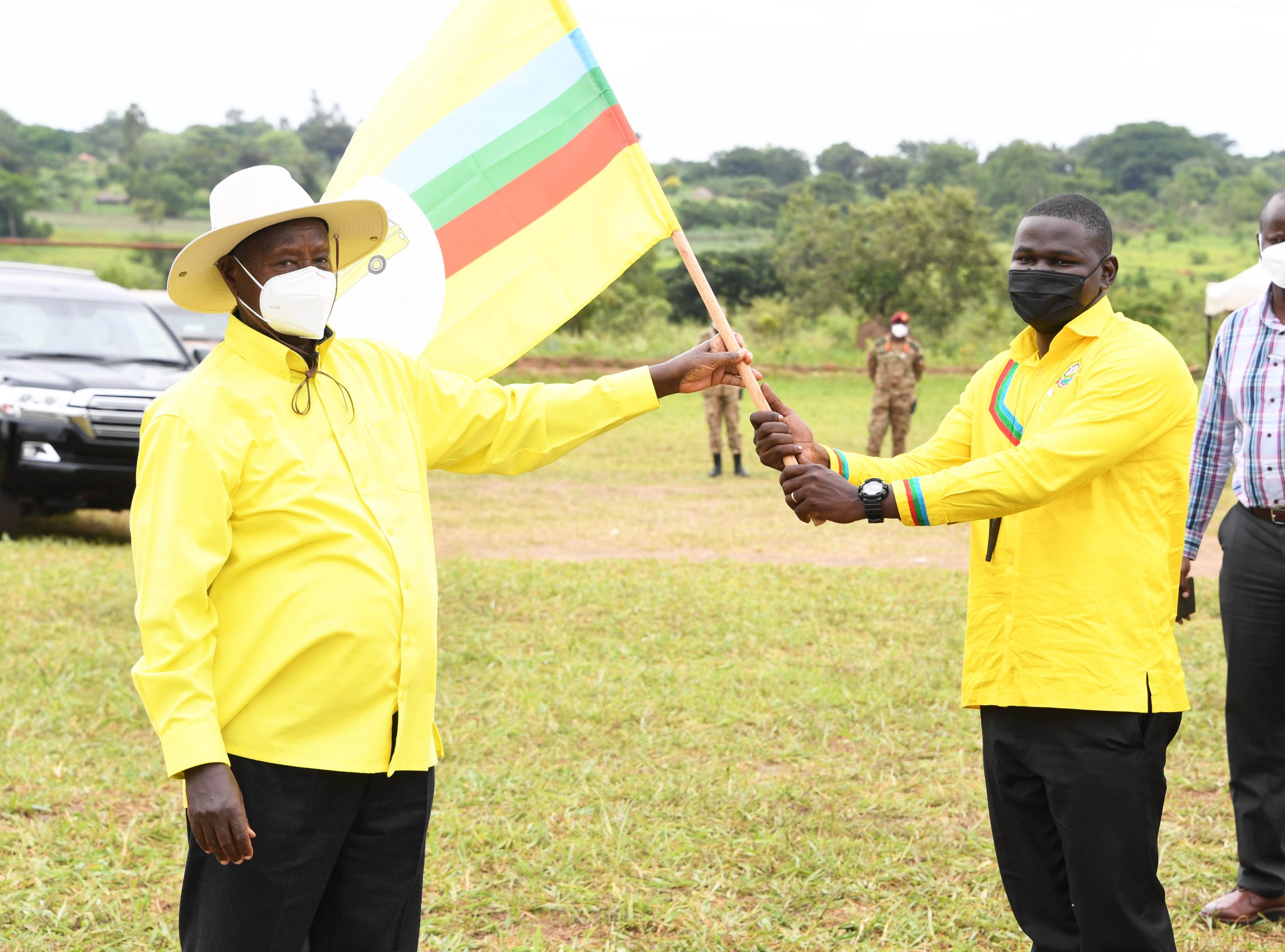 President Yoweri Museveni who doubles as the National Chairman of the National Resistance Movement (NRM) has assured the nation that the Government has more strength to eradicate poverty countrywide.

“To you the leaders, the NRM Government has put more strength in fighting poverty among the people. There are more policies the Government has put in place to chase poverty. We started with NAADS, followed by OWC. In the third phase, the Government this time round handles it at parish level through ‘Parish Developmental Model’ through which money is sent to the leaders that enables people to buy stock, seedlings, etc, in order to chase poverty in homes,” H.E Museveni said, adding that another phase for national socio-economic transformation is through a constituency fund meant for those with skills,  Emyooga, and other enterprises.

“In the long run, the Government can embark on building the infrastructure; roads, schools, health centres. Government cannot build tarmac roads where people are still walking barefoot. So, we want to start with the homes to chase poverty for one to have a home without poverty,” he said.

The President was addressing the first public rally at Odek Primary School, Olam Village, Palaro Parish, Odek Sub County, Omoro County in Omoro district today May 24, while canvassing votes for the NRM flag bearer in the Omoro Parliamentary by election, Mr. Andrew Ojok Oulanyah. The  by election arose following the demise of former area legislator, the late Rt. Hon. Jacob Oulanyah who was also the Speaker of Parliament.

The NRM National Chairman who was a close friend of the deceased attributed the NRM’s successes to exemplary leadership by characters who have served their country selflessly like the late Oulanyah.

“Though enhancing Government policies and programs, I also appeal to you, the people of OmoroCounty, to support the NRM parliamentary candidate, Andrew Ojok so that he comes and continues to complete the work the late Oulanyah would have accomplished in his term of five years in parliament,” Museveni said.

The President extended condolences to the people of Omoro and the country at large upon the death of Oulanyah. He noted that NRM as a party has got people who have the leadership talent which Oulanyah had but unfortunately passed on young.

H.E Museveni also commended the people of Omoro, thanking them for being civilised, well behaved and visionary in  nominating Andrew Ojok Oulanyah to fill the position left by his father.

“This is Oulanyah’s term, which must be finished by a person near him-the son.”

The President emphasised that if Ojok performs well, he will earn himself a position to serve the people as Ojok himself in future. He also gave credit to candidates who stepped down in his favour.

“This is not the end of the world. So, i am happy you handled the matter very well,” the President said.

“All I want from Ojok is to learn how to help the people to develop. Uganda is easy to develop with clear leadership.

He said that much of the problem is that most leaders lack the element of clarity in reminding the public how to promote socio-economic transformation at homestead level by developing and making a four piece of land commercially profitable by having an acre of coffee, fruits, pasture for zero grazing animals for dairy, poultry and fish farming with a target of earning not less than Shs10million.

“Anything where one gets less than ten million shillings per acre, I do not encourage.”

The President was happy to note that the Omoro area has high production of soya beans. This prompted him to inform them that he will identify an investor to process the produce with a target to add value and capture the  international market.

“NRM people, do away with poverty in this Kisanja! Do it with accountability!”

After addressing the rally, the President proceeded to pay homage to the family of the late Speaker where he was received by the father of the deceased, Mzee Nathan Okori.

The President later laid a wreath on the grave of the late legislator before he addressed the second public rally at Opit Primary School in Omoro Town Council.

In attendance were the key Government officials and local leaders including the Minister for Northern Uganda, Hon. Grace Freedom Kwiyucwiny, the Minister of State for Environment, Hon. Beatrice Anywar, the Director for Mobilisation at the NRM Secretariat, Hon. Rosemary Seninde and area MPs.

The NRM Secretary General, Hon. Richard Todwong, accompanied by a team from the NRM  noted the support of the Central Executive Committee (CEC) represented by the Minister for ICT and National Guidance and National Vice Chairperson for Western Uganda region, Dr. Chris Baryomunsi, the Vice Chairman for Central Region, Hon. Godfrey KiwandaSuubi, and the Women’s League  Chairperson, Hon. Lydia Wanyoto, who all travelled to mobilise for the NRM candidate.

Hon. Twodong briefed the President that the campaign started very well and thanked him for his intervention and guidance to have one NRM candidate.

“The key of this campaign is that we shall be moving from house to house, home to home, person to person, village to village and win to win,” Todwong  said.

He further commended the cohesion in the Omorodistrict party leadership that saw other contenders step down in  favour of Ojok.

The LC 5 Chairman of Omoro district, Mr. Douglas Peter Okello Okao, commended the President for being the key player in the peace and stability in the area and being the champion in the effort to steer socioeconomic transformation in the Uganda at large and Omoro district, in particular.

“Your Excellency, you invited us in the spirit of the NRM party to replace the late Oulanyah with his son. All aspirants stepped down. All declared to step down in support of the NRM flag bearer. You have seen it yourself. Andrew Ojok has tremendous support among the people,” he said.

On his part, the NRM flag bearer, Mr. Ojok, pledged to the enthusiastic people and NRM supporters of the area that he will be a committed messenger to the electorate through giving true reports of accountability of the service delivery.

“We shall do all this together in the next five years.”

He commended the President for being with the family of the late Oulanyah through the period of sadness and now in the campaign for him to become a legislator.

Don’t give up on your country, LOP Hon. Mathias Mpuuga tells Ugandans in the Diaspora