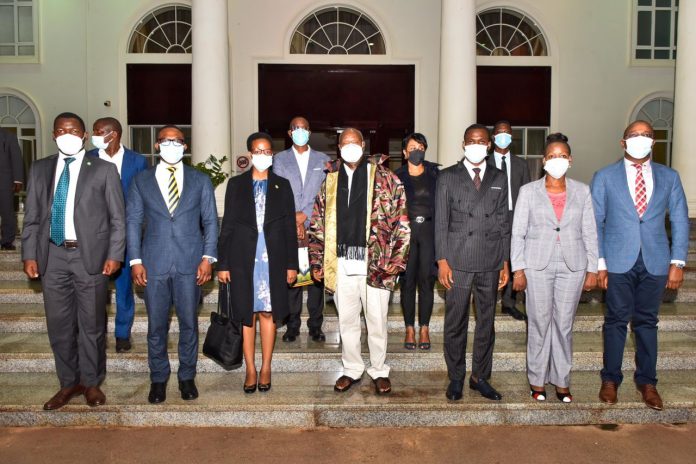 A delegation of Pan-African Youth Union leaders has hailed President Yoweri Museveni as a great living Pan-Africanist whom they look to for Africa’s future. The youth leaders, drawn from Burkina Faso, Kenya, Ethiopia, Ghana and Uganda were meeting the President at State House, Entebbe.

They were led by the Chairperson of Uganda’s National Youth Council (NYC), Mr. Jacob Eyeru.

Mr. Francine Muyumba Furaha, the President of PAYU said they were in Uganda in the in name of all African young people.

“We congratulate you for all you do for African people and your vision for the continent. We are here to ask you to support us. Your experience and leadership will help Africa’s development,” Furaha said.

The Secretary General of PAYU, Mr. Ahmed Bening who hails from Ghana, said there is no better place to be than Uganda if one wants to speak about Pan-Africanism.

“No one has promoted Pan-Africanism than you, Mr. President,” Bening said.

He said that African youths recognise President Museveni’s effort of putting Africa together.

“We say you in West Africa, where there were coups and all that. We appreciate Uganda for your contribution. Uganda is more interested in the stability of the continent than all other countries. Young people would want to come and learn from you”.

He said Uganda is the best place to promote the Pan-African spirit and requested Museveni to allow them to convene here next year for their conference. He said PAYU’s region office for East Africa will be set up in Uganda and asked the President to support its setting up to coordinate countries in the region.

He said African youths should learn from the best and from Museveni’s legacy.

The Vice President for EA, Ms. Mutesi Oliver thanked the President for planting the seed of Pan-Africanism in her through the trainings she got in Kyankwanzi and Kasenyi.

“I have been sent by youths from the 15 East African countries including Somali, Djibouti, Mauritius, South Sudan and Comoros.

The reason why they sent me is because of your history. You have walked the talk since your young days in Frelimo and with Samora Machel. We saw you with Nyerere and so on. That’s why they want to come and from that cup of Pan-Africanism,” Mutesi said.

She said the youths want Museveni to be the patron of PAYU. She thanked him for peacekeeping missions in the Great Lakes region and “the best refugee policy in the region”.

Mutesi requested for budget support and a chance for the youths to see the “magical” Ankole long-horned cattle.

In his speech, President Museveni said he was happy to meet the Pan-African youths delegation.

“Straight away, I agree to support you to hold the conference here. We shall fund it. We shall work out the out details of which countries will attend. I shall also support regional office,” he said.

The President said he was glad that the youths were taking up the issue of Pan-Africanism which he said is about three things; Prosperity, whereby a large population guarantees market for goods and services produced; Economic and-if possible- Political integration and Strategic security.

He explained that the problem in many parts of the world is that there are many small countries.

“South America is very poor yet with resources because it is fragmented. China has overtaken UK, France, Germany because of its large population of 1.4billion people. Anything you make has market there,” H.E Museveni said. “African youths must answer the question of how we can achieve prosperity without integration.”

He noted that USA has superiority on land, air, sea and space because it is united Even Russia.

“Can Uganda on its own set up a satellite in space. Even if we did, it would be small. To be secure, we should unite and work together as Africa,” the President said. and unite.

“By the way, Africans are not very different from one another. We are either similar or linked. All the 1.4 billion Africans belong to four sub-groups of Bantu, Kwa (like the Yoruba), Afro-Asiatic (like the Amhara) and Khoisan of Southern Africa.”

He noted that unlike Africans, Europeans cannot easily unite because they don’t have a common language while Africa has Swahili which is commonly spoken in EA, DRC and can be easily taught and learnt by all Africans.