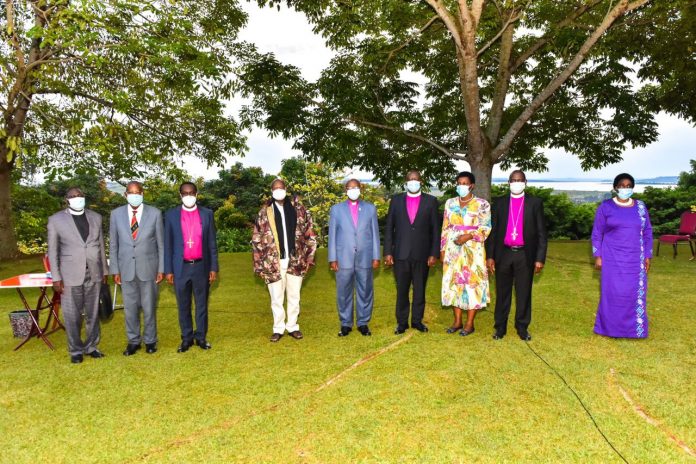 H.E the President of the Republic of Uganda, Gen. Yoweri Kaguta Museveni has met a delegation of Bishops from Greater Ankole at State House, Entebbe. The Bishops led by Rt. Rev. Dr. Sheldon Mwesigwa, the Bishop of Ankole Diocese, had called on the President to brief him on preparations for Martyrs Day which falls on June 3 every year.

Ankole is leading this year’s celebrations.

The Bishops were introduced to the President by Prof. Ephraim Kamuntu who is the Chairman of the Organising Committee of this year’s celebrations.

“We thought of something unique that Ankole to tell to the rest of the world and we said let us have our theme on East African revival. We have invited a powerful speaker, Bishop Mwaluda from Kenya, for the occasion,” Mwesigwa said.

He said that the Revival had caused great changes in Ankole. Bishop Mwesigwa said the celebrations will be used to thank God for helping Uganda overcome Covid-19.

“God has been very gracious to us in times of Covid-19. America lost a million people. Other powerful countries also lost many people. Uganda lost not more than 4, 000 people and I don’t recall any child dying from the disease. We saw God’s hand,” the Bishop said, adding that the celebrations are inspired by Lamentations 3:21-24 on “Hope after affliction.”

He thanked the President for leading Ugandans through the pandemic saying that the measures instituted, like keeping children at home during the pandemic, though misunderstood by many, helped save Ugandans. Mwesigwa reported that the Dioceses of Ankole are promoting economic prosperity among their people who are organised.

Bishop Johnson Twinomujuni of West Ankole Diocese stated that Museveni has exhibited true traits of a child of the Revival.

“Thank you for being sober. God gave you a sharp memory that makes us wonder. You are a President who fears to put anything in your mouth that would disorganise your mind. Thank you for dignifying us,” Bishop Twinomujuni said. He thanked the President for loving and caring for Ugandans. He said Ankole would support the Parish Development Model (PDM) and that they have the structures to implement and monitor the programme through their Church SACCOs.

Bishop Stephen Namanya of North Ankole thanked the President for standing with the Dioceses of Ankole and supporting preparations for the celebrations.

In his speech, President Museveni said the theme of Revival is very good and opened the eyes of the people. He recollected how his parents had embraced Christianity and abandoned their old ways and how he came to be baptised. He said that the revival made his mother enlightened even though she was not educated.

“The Revival made people abandon their old ways of believing in emandwa (spirits), drinking alcohol and sharing drinking pots which spread disease. They also learnt to boil milk. They left their pagan ways,” he said.

He said that, however, they believed so much in the Biblical saying of working for heaven only and where it says that birds do not plant, weed or harvest but they never lack.

“I had my sub-theology and told them that you are not birds. They had that attitude of withdrawal from things of the world but starting from 1967, in the Nyabushozi area to change their mindset. I don’t know if you still have them,” the President said. He noted that the testimony of the Revival in Ankole is very strong and should be celebrated. He promised to meet the Bishops again after the celebrations.

Others present at the meeting were Bishop Nathan Ahimbisibwe of South Ankole who prayed for God to continue blessing the President and giving him strength.

Others were Rev. Edson Abaasa, the Diocesian Secretary of Ankole and, Hon. Karooro Okurut, the Chairperson of the Publicity Committee. Bishop Amos Magezi of North West Ankole Diocese was said to be away on a working trip to the UK.