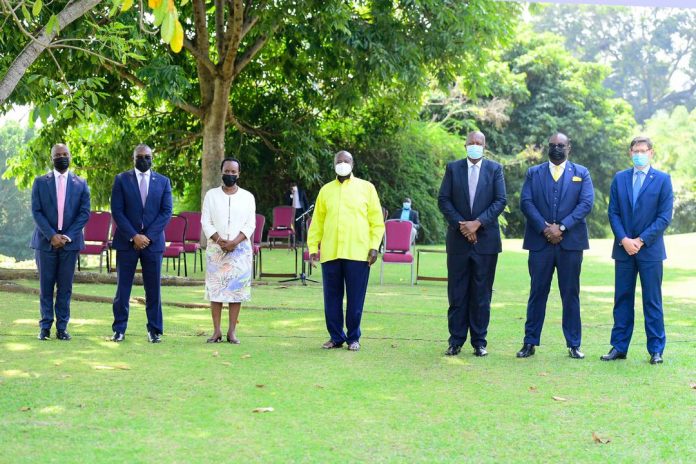 President Yoweri Museveni wants Commercial Banks to start looking at ways of attracting more Entrepreneurs into the Country. Museveni argues that despite the stability and security and a good investment climate prevailing in the country, there are low levels of local entrepreneurship and this has slowed efforts to achieve higher levels of growth.

The President says Foreign Companies including Banking and Telecommunication Services, are concentrating a lot on making profits from Ugandans and have not done enough to attract and support business and entrepreneurial growth in the country which has been his intention for allowing foreign companies to operate in Uganda.

“For instance, I told MTN, don’t just come here to make money from villagers who are making calls. Bring investors in value addition so that they invest in agriculture, minerals etc. This was my idea,” H.E Museveni said.
The President was meeting officials from Amalgamated Banks of South Africa – ABSA Bank led by the Group Chairman, Mr. Sello Moloko at State House Entebbe.

The president noted that for a longtime, Africa has been lacking peace, macro-economic stability and infrastructure, saying after these are worked on, the only thing lacking are entrepreneurs to support growth through processing because the market is there.

“If you have these three, then the next thing you need is entrepreneurs. Even for banks, you’ll have more money to keep if you have more entrepreneurs,” the President said, adding that there is a ready market for the products.

“The king of business is Natural Resources, Infrastructure and the Market. We have the market, namely; 43 million Ugandans here, that of East Africa (300 million people), the Common Market for Eastern and Southern Africa (COMESA), the whole of Africa. We need Entrepreneurs who have got the eyes to see an opportunity and the capital to invest,” Museveni noted.

ABSA Bank Group Chairman, Mr. Sello Moloko informed the President that through their franchise, they will identify entrepreneurial opportunities to invest in.

“We do have a presence here in Uganda and we would like to expand our interests into various areas. We just want to assure you Mr. President that we are very serious about supporting entrepreneurs. We shall use your Office in Pretoria to connect investors and interest them in this economy,” Chairman Maloko said.