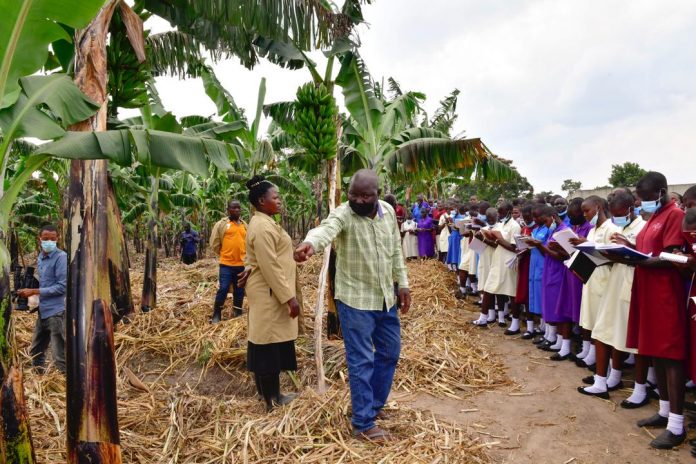 Over 200 schools girls from Tororo Girls School (TGS) under their umbrella association, Young Farmers Association, were yesterday, Friday, taken on a guided tour of the Kawumu Presidential Demonstration Farm in Luweero district.

The delegation of students and teachers who were led to the farm by the school’s Head Teacher, Madam Beatrice Akware, visited the farm purposely to acquire knowledge and skills on the best farming practices.

TGS, under their former head teacher, Mrs Hellen Wataba, wrote to the President in March this year seeking for permission to tour and learn from one of the Government’s demonstration farms.

The delegation comprised of students from Senior one to Senior six especially those taking Agriculture as a subject. They were received by the Farm Manager, Mr. Geoffrey Gandugga, at 1pm and there after taken on a guided tour of the farm.

Among the many enterprises at the farm which the students visited were a fish farm; a green house with a nursery bed, a tomato garden, cabbage farm, pasture, poultry keeping; Dairy farming; banana, coffee and mango plantations and pineapple garden.

Mr. Gandugga told the students and their teachers that much as they had toured all the enterprises at the farm, they emphasise the four- acre model that the President speaks about passionately especially for people with small pieces of land.

“As we demonstrate, we emphasise enterprise selection under the four- acre model plan,” Mr. Gandugga said.

The Private Secretary to H.E the President in Charge of Youth Affairs, Ms. Hellen Saku, said that the purpose for which demonstration farms were started was to help Ugandans realise that Agriculture is profitable and that one can get rich through Agriculture if done with a Kibalo (calculation).

“The President’s purpose for starting these demonstration farms was mainly to help Ugandans know that agriculture is very profitable. Here, we demonstrate only good agricultural practices. We thank God that you have come here,” Ms. Saku said.

Mindset change, according to Ms. Saku, is also encouraged for all Ugandans especially the young people.

“What is your attitude towards Agriculture? Is it positive or negative?” she asked.

Asked by the students what inspired the President to start up these demonstration farms, Mr. Gandugga said that the President is so passionate about the development of Uganda.

President Museveni has since encouraged all Ugandans to participate in any of the four sectors of wealth and jobs creation. The four sectors are; Commercial Agriculture, Industry (small or big), Services and ICT.
Kawumu Presidential Demonstration farm was commissioned by H.E Museveni in November 2016.
The farm has since helped the community and other people from across the country that visit it to learn good farming practices, according to Mr. Kiwuuwa Charles, the Private Secretary in Charge of Agriculture and Supervisor of the farm.

“The President is promoting diversification with a four-acre enterprise. You can choose two, three or four as long as they will give you income. Start slowly with one thing and grow,” Mr. Kiwuuwa advised the student’s delegation.

The TGS Headteacher, Mrs. Beatrice Akware, commended President Museveni for his visionary leadership and for the opportunity he gave the school to visit the farm.

“We are happy that we are here. In a special way, we want to thank the President for giving us this opportunity as Tororo Girls School. Not every one comes here,” she said.

She added:”We have gone back totally transformed and we promise to put all we have learnt in practice. We are very grateful for having given this opportunity.”

President Museveni set up regional Presidential Demonstration farms in Kawumu-Luweero, Kityerera in Mayuge, Barlegi in Otuke and Arua, among others.

These farms demonstrate basic agricultural practices that farmers can adopt to enhance productivity on their farms.