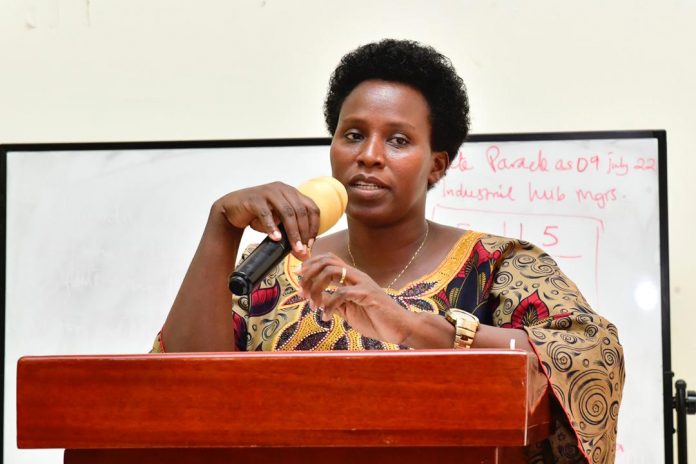 The State House Comptroller, Madam Jane Barekye, has advised industrial hub managers currently undergoing a two week leadership training at the National Leadership Institute (NALI) in Kyankwanzi to use the opportunity of their new roles at the hubs to contribute towards the development of the country.

Madam Barekye, who was on Friday giving a lecture to 40 newly appointed managers and their assistants from the different State House industrial hubs spread across the country, stressed that by giving clear leadership in the skilling programme of youths in their respective regions, they will be making a positive contribution towards Uganda’s development.

She stressed that it will be through such programmes that the Government will eliminate poverty in rural and urban households in Uganda. She applauded the vision and efforts of President Museveni for coming up with the great skilling programme.

“Please, use this opportunity as managers to contribute positively towards the development of our country by serving diligently at all times to ensure the success of the skilling program in your respective regions,” she said.

Barekye also challenged the managers to ensure that there is strict discipline among the learners saying any form of indiscipline such as immoral behaviors will discredit the main objectives of the skilling programme.

She said each industrial hub will be accommodating a total of 300 youths who will be training in different skills over a period of six months adding that all the participants shall be residing at their respective hubs.

NALI Deputy Director, Col. Henry Seruga, welcomed the participants saying they will do their part to churn out cadres who are patriotic, committed with perseverance and have a broad understanding of Uganda’s national interest and elements that shape the country’s political and economic panorama.

He said as Uganda gears towards Vision 2040, they need to remind themselves of their cardinal roles in this effort saying being industrial hub managers places upon them a high premium in terms of responsibility, good leadership, creativity and innovation.

“We are confident that these young men and women will measure up to the country’s leadership expectations,” he said.

Eng. Raymond Kamugisha, the Director Presidential Projects and Industrial Hubs, disclosed that 12 industrial hubs will be starting full operations by the 23rd of July and will each admit a total of 300 youths per semester who will be studying on a residential basis for six months.

He said the hubs will go a long way in acting as key centres for transforming the lives of Ugandans across the country.

Earlier on, the State House Comptroller and her team met and held discussions with Brig. Gen Charles Kisembo, the Director of NALI who expressed his delight for hosting the 40 participants saying they are sharing a lot of experiences in terms of knowledge, skills and essential tools to enhance their effectiveness.