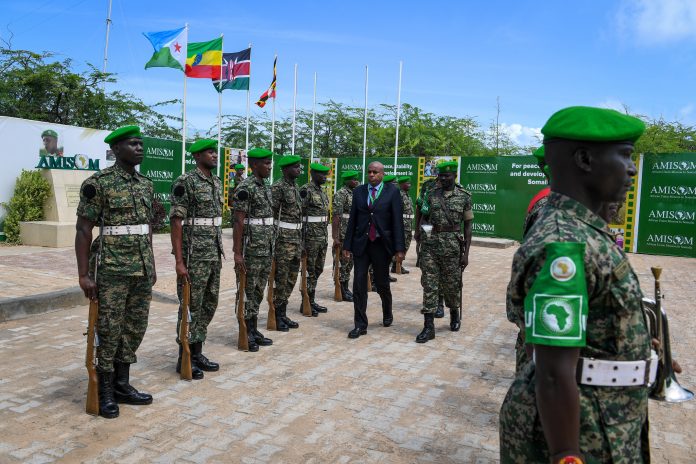 A delegation from the African Union Peace and Security Council (AUPSC), arrived in Mogadishu on Tuesday 19 July, on its first assessment visit to the country since the African Union Transition Mission in Somalia (ATMIS) was launched on 1 April, 2022.

“The objective of this visit is to gather first-hand information on the framework of the implementation of the ATMIS mandate and progress made towards the Somalia Transition Plan,” said the leader of delegation, Ambassador of Djibouti to Ethiopia and Permanent Representative to the African Union, Abdi Mahamoud Eybe.

“The expectation is to have a comprehensive understanding of the situation on the ground that will inform deliberations during our upcoming Ministerial Peace and Security meetings, scheduled to take place on 27th of July 2022,” added Ambassador Eybe.

On arrival, the PSC was briefed by the ATMIS senior leadership team, led by the Deputy Special Representative of the AU Commission Chairperson (DSRCC) Ms. Fiona Lortan.

The delegation was updated on various issues, including the current security situation, progress in implementation of the UN Security Council Resolution 2628 (2022), the humanitarian emergency brought about by the current drought, as well as political developments in the country, including the recent successful conclusion of parliamentary and presidential elections, where ATMIS supported the Somalia Security Forces (SSF) in securing the elections.

The delegation was also briefed on Somalia’s national priorities as outlined by President Hassan Sheikh Mohamud in his inaugural address. These include national reconciliation, improving relations between the central government and federal member states, addressing the security challenges, in particular the security threat posed by Al-Shabaab, and attending to the drought-related humanitarian emergency.

While in Somalia, the PSC delegation has held a series of meetings and consultations with various key stakeholders including top officials of the Federal Government of Somalia, the United Nations, the European Union, Inter -governmental Authority on Development (IGAD), envoys from ATMIS’ troop and police-contributing countries as well as representatives from Somalia’s civil society groups.

The AU Peace and Security Council (PSC) has 15 members and is the standing decision-making organ of the AU for the prevention, management and resolution of conflict and crisis situations in Africa. It is also the key pillar of the African Peace and Security Architecture (APSA), which is the framework for promoting peace, security and stability in Africa.