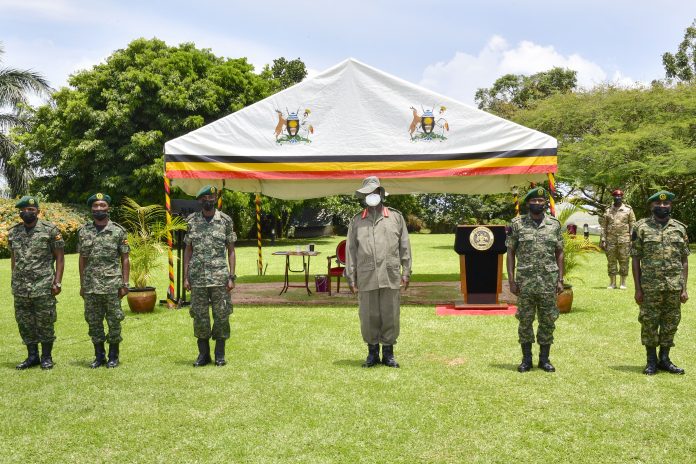 STATE HOUSE, ENTEBBE: President Yoweri Kaguta Museveni who is also the Commander in Chief (CIC) of the Uganda Peoples Defence Forces (UPDF) has met with the country’s Security High Command during which they discussed the country’s successful handling of several pandemics including COVID 19, Locusts, Operation Shujaa and the security situation in the Karamoja region.

He commended the UPDF for their efforts in enforcing Covid-19 standard operating procedures (SOPs) when the pandemic was at its peak.

“I congratulate you for going through the Corona pandemic. Thank you for doing your part of enforcement. Many countries like U.S.A lost many people, over one million, but because of our correct line and guidance we only lost about 3,000 people,” Gen. Museveni said.

The President added that if it weren’t for the indiscipline of some opposition groups during campaigns that led to the second wave of the virus, Uganda would have lost very few people.

“I salute you for your contribution. Thank you for fighting the locusts and for stopping the insecurity that was paused by some wrong elements during elections with the aim of making the country ungovernable,” he said.

The President briefed the High Command about the progress of the Operation Shujaa in Congo and assured them that the operation is moving well and soon ADF will be no more.

“The operation in Congo has gone very well and we are now in phase three of sweeping all the camps of the enemy. We have only lost 3 soldiers and two of them died from self accident,” he said.

Mr. Museveni said that this was all because of the good planning and strategies of the Uganda Peoples Defense Forces (UPDF).

Operation Shujaa is being implemented following a Memorandum of Understanding between the Government of Uganda and the DRC to conduct joint operations for the eradication of ADF and other foreign-armed groups in the eastern part of DRC.

On the issue of cattle rustling in Karamoja, President Museveni said that there should be no cow stolen from anyone and that government is going to work on the security roads in the region to facilitate the swift security operations.

“The cattle rustlers are not a big problem. Nobody should be stealing cows. I want us to make a law criminalizing cattle-rustling,” he said.

During the same meeting, President Museveni commissioned 5 junior officers at the ranks of Lieutenant and Second Lieutenant who have been undergoing Basic Military Training Cadet courses in Kenya, United Kingdom, and Jamaica respectively.

“I Gen. Yoweri Kaguta Museveni, President of the Republic Uganda and Commander In Chief of the Armed Forces by the virtual of the authority entrusted to me by the constitution of the Republic of Uganda and the law governing the defense forces of Uganda do hereby commission you to be officers of Uganda People’s Defense Forces at the ranks of Lieutenant and Second Lieutenant. May God help you,” President Museveni said during the commissioning.

Others were Lt. Andrew Mwebembezi, Lt. Alfred Blac Mulabi and Lt. Allan Akampulira who were all on a three years course in Kenya.