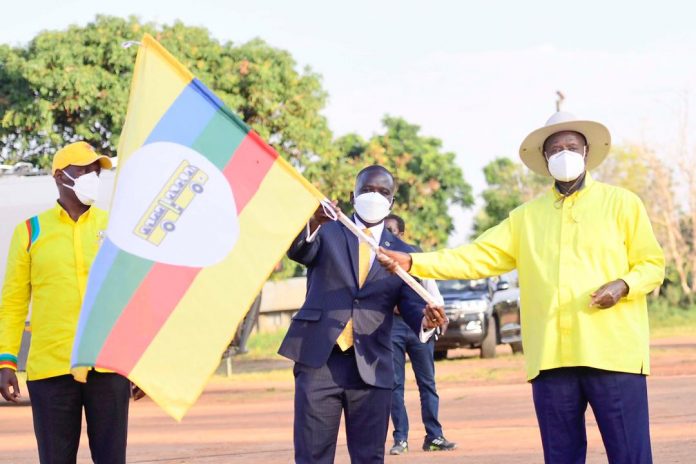 The National Chairman of NRM, President Yoweri Museveni, has told the people of Teso sub-region and Soroti City East Constituency in particular that politics is not about personalities but about the party that can ably solve challenges faced by the people.
“Politics is not about leaders but it is about ourselves and the party that can ably solve the problems of the people. You need a good tube ‘epii’ in Ateso’ to be able to suck properly Ajon (local millet brew) from the pot and that epii is Ariko,” H. E Museveni said.
The National Chairman of NRM was this afternoon in Soroti City East Constituency to drum up support for the NRM flag bearer, Hon. Herbert Edmund Ariko, in the forthcoming by-election slated for Thursday, July 28, 2022.
The Soroti City East Constituency seat fell vacant following the annulment by court of the victory of FDC’s Attan because of election irregularities.
President Museveni told delegates who had gathered today at St. Kizito Technical School playgrounds in Madera Ward, that politics is about a party that can and will always be with the people solving their problems that include Security, adding that NRM is the only tested party that can implement that task.
The NRM National Chairman said even if a candidate is good but is in a bad party that person is of no value and cannot do much to help the wanainchi.
He, therefore, advised the electorate in Soroti City East Constituency to support the NRM flag bearer, Ariko, as he is standing for NRM that is doing much for the country in various sectors like infrastructure.
He reminded them of the politics of the 1960s that was sectarian resulting in the bloodshed that caused a lot of chaos in the country.
President Museveni also reminded the people of Teso how NRM managed to overcome numerous challenges that included among others floods, locusts and recently the COVID-19 pandemic that ravaged the world but because of the correct policies and measures taken by NRM, the number of deaths was significantly reduced compared to the developed countries that lost millions of their people.
On the Education sector, President Museveni strongly urged the people of Teso sub-region and the country at large to reject the move by some retrogressive elements to bring back charges in schools pointing out that his main plan was to help the children of the poor attain free education.
“You need to force those who don’t accept my plans to stop their schemes. The completion rate of primary education is 38 %, 62% don’t go beyond P7. Now how do you modernise the country?” he wondered.
He urged the people of Teso and Uganda in general to support the plan of the NRM Government to implement Universal Education in Uganda before the end of the Government’s term.
On wealth creation at the home stead level, President Museveni reminded the people of Teso to embrace modern and calculated farming, advising families with small land holding to concentrate on intensive agriculture and leave extensive farming to people with huge chunks of land. He further asked those with a few acres to practice poultry and piggery in the back yards of their homes. Those near the swamps can use the edges of the water bodies for fish farming. He cited the project being run at Limoto in Pallisa and that of Anyara in Kaberemaido as some of the successful projects in fish farming.
The President also urged Ugandans to take advantage of the Parish Development Model (PDM) now being rolled out, describing the program as a rescue formula.
The President said another intervention is the Emyooga for those with no land as it mainly involves hand skills.
President Museveni told the gathering of the wooing of investors to Uganda to build factories that will create employment and widen the tax base.
He said the people of Teso sub-region are witnesses to the work already done like the construction of the good road network in the region and plans to build the road from Kumi to Ngora to Serere and beyond, the road from Soroti to Amuria, Obalanga to Acan Pii among others, and the ferry from Bukungu, Muntu, Kagwara to Bugondo.
On the fuel crisis, the President said Government will spend the available resources for the new safer energy sources in a modern way like the making of electric vehicles and motorcycles, railways, as well as solar and wind energy instead of agitating for fuel subsidies.
The NRM National Chairman later handed over the NRM flag to Ariko.

The Vice President, H.E Maj. Jessica Alupo, introduced to President Museveni members of NUP who have volunteered to support the NRM flag bearer.
One of the NUP members, Ms. Grace Asio, who was formerly an NUP leader in Soroti said they had been instructed by the NUP leadership to support FDC but they rejected that call and instead decided to drum up support for the NRM candidate.
She further disclosed that they are now ready to work with the NRM for the development of Teso sub-region.
The other NUP member from Tororo, Mr. Opondo, said they had been deceived by the NUP leadership that President Museveni is a dictator but they discovered that the NUP leader is more of a dictator and is very sectarian.
H. E Alupo reported to President Museveni of the appreciation by the people of Teso for the peace and security now prevailing in the country.
“This has made the people of the area go about their businesses without any interference,” she said.
She strongly urged the electorate in Soroti City East Constituency to rally behind the NRM flag bearer, Ariko.
The Secretary General of NRM, Hon. Richard Todwong, thanked the people of Teso for voting NRM in the last elections. He assured the people of areas that were annexed to the newly created City that NRM will deliver all the services that they are lacking like electricity and clean water.
The Vice Chairperson of NRM Eastern region, Captain Mike Mukula, assured President Museveni of a land slide victory by the NRM flag bearer.
He raised the issue of cattle compensation adding that it is still a thorn in the flesh of the people of Teso sub-region.
The Chairman NRM in Soroti City, Mr. Bisanga Willy, thanked President Museveni for the University as well as the PDM program.