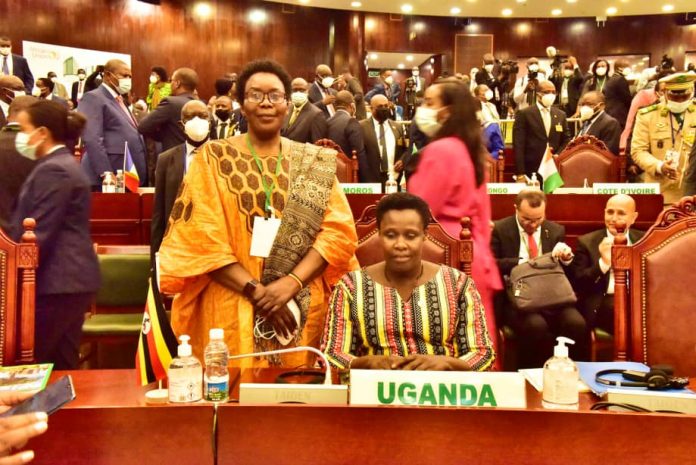 Uganda has announced a pledge of One Million USD to the newly initiated African Union Humanitarian agency that seeks to find collective methods to address humanitarian status in Africa.

The pledge was announced by Vice President Jessica Alupo who represented President Museveni at the ongoing African Union Extra ordinary summit, in Malabo, Equatorial Guinea. “Africa continues to face some of the most complex humanitarian emergencies, which are, in some cases, the result of natural and human induced disasters, but in very many ways, others are driven by conflicts leading to mass displacements of persons both within and across national borders” Alupo stated, adding that “there is need for responsibility and burden sharing”, because “No Government can handle the present massive humanitarian situation alone”.

The Vice President gave a comprehensive background of the refugee status in Uganda, highlighting the role that the country has played in hosting, resettling and supporting the refugees. “Uganda is currently hosting 1,582,076 refugees, the highest number in Africa and operates one of the most progressive open-door policies on refugees anchored in the 2006 Refugees Act and the 2010 Refugees Regulations. The policy guarantees freedom of movement and the right to employment, education and health, as well as the right to conduct a business. It grants them the same rights that citizens enjoy”, she stated.

Alupo also rallied for more international support towards refugees, and host communities, including through the provision of adequate, flexible, predictable and consistent humanitarian financing to enable host countries and communities, respond to the immediate humanitarian, and longer-term development needs. “94% of these refugees live in settlements alongside host communities”, she said.

Earlier, President Obiang Nguema Mbasogo of the Republic of Equatorial Guinea recalled his experience with the refugee community when he visited both Ethiopia and Uganda, saying the solution to avert the refugee crisis on the continent is for Africa to unite and stop the discrimination against fellow Africans. “These, if unchecked, force displacement”, adding that “the solution is in our hands”, announcing his pledge to the African humanitarian agency as well.

On his part, the AU chairperson who is also President of Senegal Macky Sall urged leaders to address root causes of humanitarian crises in Africa, saying “prevention” is better and “easier than cure”

Several dignitaries, including heads of state, and leaders of delegations from nations across Africa attended, with several other countries making pledges on behalf of their countries.

The AU summit will tackle terrorism and unconstitutional changes of Governments.