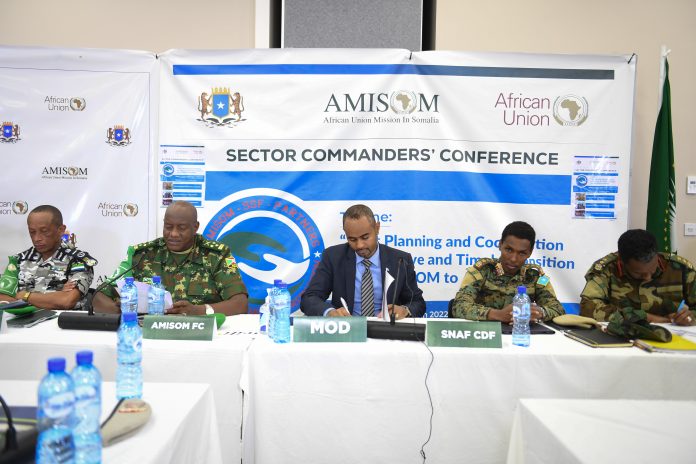 Senior African Union Mission in Somalia (AMISOM) and Somali National Army (SNA) military commanders have agreed to set up joint technical teams to work on implementing the Concept of Operations for the new AU peace mission in Somalia that will be replacing AMISOM effective April 1.
The Concept of Operations (CONOPS 2022-2024) is a comprehensive document that will,
together with the Somali Transition Plan (STP), give direction to the operations of the new
mission, which will be called the African Union Transition Mission in Somalia (ATMIS).
The decision to set up the joint technical teams was reached on Thursday in Mogadishu,
following a four-day conference to plan the transition from AMISOM to ATMIS. The
conference was attended by representatives from the Federal Government of Somalia
(FGS), military commanders from SNA and AMISOM, representatives from Somali Police
Force and AMISOM Police, as well as officials from the United Nations Support Office in
Somalia (UNSOS), United Nations Mine Action Service (UNMAS), the UK Mission Support
Team (UKMST), European Union Training Mission (EUTM), and several of Somalia’s
international partners.
“It is recommended that joint technical teams made up of representatives from ATMIS,
Somali Security Forces and UNSOS be set up within two months to agree on the
implementation of the proposed CONOPS. Discussions should continue within the theatre of
operations to agree on which Forward Operating Bases (FOBs) to hand over, to relocate or
to collapse,” said AMISOM Force Commander, Lieutenant General Diomede Ndegeya, at
the end of the conference.

Lieutenant General Ndegeya reiterated that Al-Shabaab is still a security threat to Somalia,
and that degrading the armed militants remains a key priority going into the new mission. To
this effect, he called upon the sector commanders of the SNA and ATMIS to continue
conducting targeted joint operations, as well as operationalize the Joint Operation
Coordination Centres that AMISOM set up recently to aid intelligence coordination and
action.
“From a threat assessment, it is observed that Al-Shabaab remains the main security threat
in Somalia. Its strong sanctuaries remain present in Jubaland, Lower Shabelle, Middle
Shabelle, and Galmudug. The use of Improvised Explosive Devices remains Al-Shabaab’s
weapon of choice to carry out large scale atrocities,” Lt. General Ndegeya said.
The Minister of Defence in the Federal Government of Somalia, Abdulkadir Mohamed Nur,
said the achievements of AMISOM since it started operating in Somalia in 2007 should be
consolidated under ATMIS through further capacitation of the Somali security forces in
preparation for their takeover of Somalia’s security responsibilities from ATMIS in 2024.
“The FGS is committed more than ever to ensuring its security forces are capacitated and
equipped to the standard required for the achievements of the implementation of the
CONOPS and to meet the Somalia Transition Plan benchmarks,” said minister Abdulkadir
Mohamed Nur.
The minister called for more Civil Military Coordination (CIMIC) activities under ATMIS so
that local communities can feel the positive impact of the peacekeepers’ involvement in their
day-to-day lives, and work with them towards peace and stability in Somalia.
“Defeating Al-Shabaab should not be limited only to military means, we need more
community engagement to ensure sustainable security and stability in liberated areas by
capacitating CIMIC capabilities and enhance its strength to cover the critical needs of the
communities and improve the civil military relations in order to win the hearts and minds of
the people,” said Nur.
The SNA Chief of Defence Forces (CDF), General Odowa Yusuf Rage, stressed the need
for the international partners to channel logistical support to not only the joint operations
between SNA and ATMIS, but also operations independently carried out by the SNA.
“In order for the mission to achieve its specific tasks within the timelines spelled out in the
CONOPS and transition phases, the support of the international community and partners is
vital. We request for more logistical support for the Somali National Army for its independent
military operations, aside from the joint operations, that have shown effectiveness to
degrade the enemy,” said General Odowa during the closing ceremony of the conference.
The Sector Commanders’ Conference is a meeting mainly between AMISOM and SNA that
happens quarterly to plan the mission’s security priorities.